The SC Philharmonic begins the Second Season of The Chamber Crawl 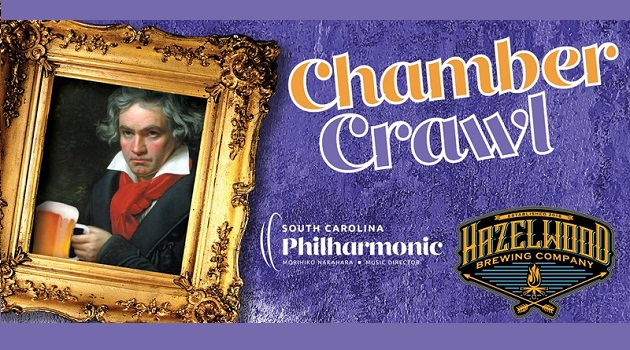 SERIES BY RETURNING TO HAZELWOOD BREWING IN LEXINGTON, SC

Woodwind trio will perform concert in neighborhood biergarten on Sept. 16, 2022

The South Carolina Philharmonic presents the first concert of the 22/23 Chamber Crawl Series on Friday, September 16, 2022, in the biergarten at Hazelwood Brewing (711 E Main St, Lexington, SC 29072). The concert will boast a woodwind trio that will feature orchestra members Joe Eller, clarinet; Ryan Knott, cello and Hassan Anderson, oboe. Hazelwood will be serving its award-winning brews, along with wine and other snacks. The Café Strudel food truck will also be there selling delicious food for dinner. General admission tickets are only $20. Gates open at 6:00 PM, and the concert starts at 7:00 PM. Tickets may be purchased at www.scphilharmonic.com.

By taking chamber ensembles to various bars and restaurants in the Midlands in 2022, the SC Phil expanded its outreach to hundreds of music-lovers seeking classical fare in untraditional spaces. The Chamber Crawl series brought performances to Craft & Draft (Irmo), River Rat Brewery, The War Mouth and Hazelwood Brewery in 2022. Due to the success of the series, the organization has made it a fixture in its outreach programs.

Due to a sold-out concert at Hazelwood Brewing in July 2022, the orchestra and brewery owners immediately began collaborating to open the second Chamber Crawl Series season with a return to Lexington’s Main Street biergarten. Where the last concert featured a percussion ensemble, this performance will boast a woodwind trio.

Cellist Ryan Knott performs with several orchestras around the Southeast, including the
SC Phil, the Greenville Symphony Orchestra, and the Longbay Symphony. He has since taken his cello playing to new mediums and genres — his YouTube channel which features performances of songs ranging from rock, to shred, to dubstep, has a following of over 5,000 subscribers and over 1 million views.

American oboist Hassan Anderson is a soloist, chamber musician, conductor and teacher. He was also named the Yale School of Music 2019 Distinguished Teaching Artist of the Year.

The Chamber Crawl series serves SC Phil’s ongoing goal to make classical musical accessible and unbutton the perception that the experience may be buttoned-up. “Music is universal in the way it connects with people,” said Susan Cafferty. “This series is a great opportunity to make more connections with the music by bringing it to Midlands bars and restaurants that are craving new experiences for their community and customers.”

General admission tickets may be purchased for $20 at scphilharmonic.com or by calling the SC Philharmonic at 803.771.7937.

The South Carolina Philharmonic is committed to performing live symphonic music and providing dynamic educational opportunities in the Midlands. We carry forward a legacy of passion for the music and embrace our responsibility to be a vibrant part of the cultural fabric of our diverse community.