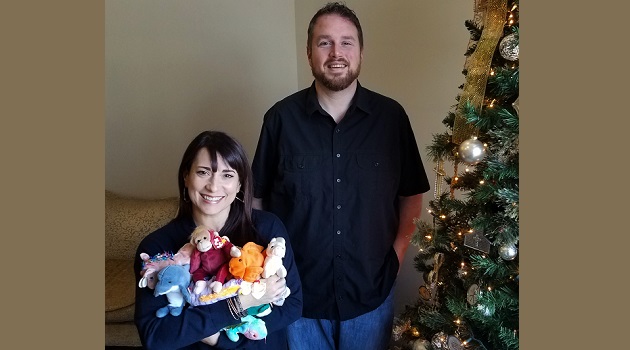 “These are small tokens of our appreciation for these girls and young ladies whose stellar two-show performances, I understand, have become something of the talk of Columbia,” said Sheriff Lott. “As busy as we all are this time of year, it is important we stop and remember what the season is all about, and these children and others performing in other Christmas shows around the Midlands are helping us do just that.”

Composed by Michael W. Smith, NEPC’s performance of Agnus Dei (Lamb of God) was directed by NEPC’s Director of Music Jeremy Buzzard and Assistant Director of Music Kerri Grimsley Roberts (aka Mary Poppins and Maria in the Sound of Music among other starring roles) of Town Theatre fame.

The eight little angels, ages 7-11, sang ‘Gloria with Lux Venit’ as part of the cantata. The teenage ballerina angels are students at the Columbia Ballet School. The cantata also featured the NEPC choir, orchestra, and a number of other performers.

– Pictured are Kerri Roberts with Beanie Babies and Jeremy Buzzard.