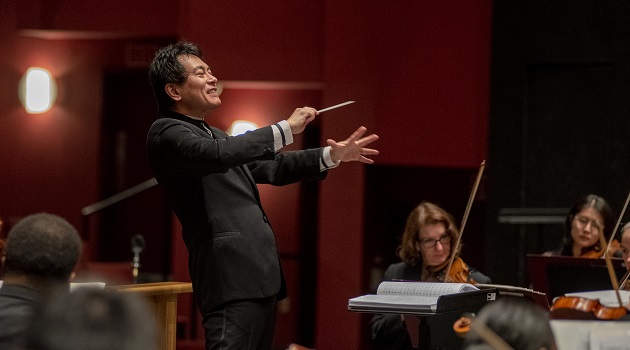 One Columbia for Arts and Culture proudly has announced that Morihiko Nakahara, the Music Director and Conductor of the South Carolina Philharmonic, is the recipient of the 2021 Stephen G. Morrison Visionary Award.

The Stephen G. Morrison Visionary Award is an annual recognition of a Columbian who reflects many of the values and qualities of those generously given by One Columbia’s former leader in support of the growth and vitality of his City of Columbia. Morrison, who passed away in 2013, co-chaired the One Columbia Arts and Culture Board of Directors for three years.

A native of Kagoshima, Japan, Nakahara holds degrees from Andrews University and the University of Cincinnati College-Conservatory of Music. Known for his charismatic presence on and off the podium, innovative and audience-friendly programming skills, and thoughtful interpretations of both standard and contemporary repertoire, Nakahara was featured in the League of American Orchestra’s prestigious Bruno Walter National Conductor Preview in March 2005. Equally at home in a wide variety of musical styles and concert formats, Nakahara has collaborated with Chris Botti, Béla Fleck & the Flecktones, Edgar Meyer, Brandi Carlile, Pink Martini and Sergio Mendes to name a few.

The 2021-2022 season marks Morihiko Nakahara’s 14th season as Music Director of the South Carolina Philharmonic, and he also serves as Director of Orchestral Studies at the University of Massachusetts Amherst and recently concluded a 17-year tenure as the Resident Conductor with the Spokane Symphony Orchestra.

“I am incredibly honored and humbled to receive this award, on behalf of the entire team of musicians, administrative staff, board members, tech crew, and our loyal audience members near and far,” said Morihiko Nakahara. “The Covid-19 pandemic taught us to be patient and nimble, but the level of trust that our orchestra’s stakeholders and constituents have for each other and the passion with which they embody their roles have allowed us to be bold and ambitious during this time. This honor is especially meaningful for me on a personal level because in the few years I knew and interacted with Steve Morrison, I was always inspired and energized by his tireless advocacy for the arts in Columbia and for equal access to arts education and enrichment in every community. Steve’s vision is our mission, and I am blessed to continue working in Columbia’s vibrant arts community for all people.”

The recipient of the Steve Morrison Visionary Award honors the best combination of vision and leadership, applied to arts and history and the entire cultural foundation of the City, and the value they bring to Columbia.

“Over the fourteen years that Morihiko Nakahara has shared his pioneering vision as Music Director and conductor for the SC Philharmonic, he has served as an ambassador for culture and music, as well as advocate for the growth of our city’s fine arts and humanities environment,” said Mayor Steve Benjamin. “Morihiko truly embodies the traits recognized by The Stephen G. Morrison Visionary Award, through his commitment to furthering the artistic vitality of Columbia.”

An event is being organized to present Mr. Nakahara with the award and is expected to be held in mid-January 2022. Details to come.