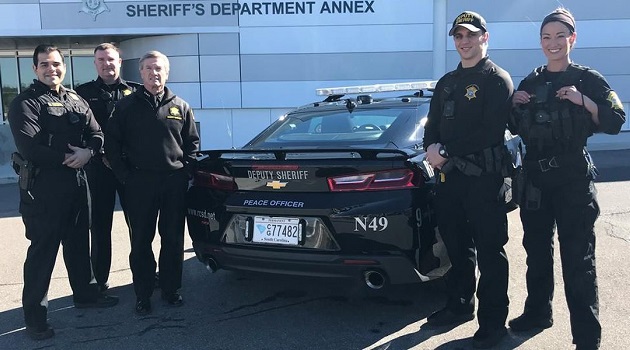 In January of 2018, the Richland County Sheriff’s Deptartment (RCSD) became the first sheriff’s office, nationwide, to add the words PEACE OFFICER to several of its marked patrol vehicles, ultimately its entire fleet of more than 600 marked vehicles. RCSD was selected along with the Redlands (CA) Police Deptartment to be the two pilot programs for the new identity initiative, and several law enforcement agencies around the country have since been brought into the fold.

Lisa Broderick, executive director of Police2Peace, a national non-profit which is facilitating the project and the accompanying research being conducted by the Joint Public Policy Institute (betagov.org) of New York University and UCLA explained why RCSD was chosen as one of the first two?

“Simple, it’s the sheriff (Leon Lott) and his really good relationship with those within the communities served by RCSD,” said Broderick. “RCSD was perfect for this program because of the obvious importance we saw Sheriff Leon Lott placing on commitment, discernment, fair-mindedness, honesty, transparency and compassion within the department. He saw that if the PEACE OFFICER reminder could get officers to see the perspective of another, to enhance compassion, then it would be worthwhile.”

Broderick added, “Sheriff Lott perceived that reminders like the PEACE OFFICER identity initiative tend to engender an awareness and compassion that can shift how officers show up to situations in the community, which then changes the energy of the encounter for the better.”

The research began with what Broderick refers to as a “randomized controlled trial” wherein a few of RCSD’s eight regions had the decaled wording placed on vehicles for the initial six months. Following the six-month period, decals were placed on all vehicles in all of the county’s regions. Those surveyed during the research included RCSD deputies, employees, and the citizens living and working within the county’s various communities.

When the question was posed, “Do you think people can change?” nearly 90 percent who saw the decals strongly agreed as opposed to about 65 percent who did not see the decals.

When asked if they perceived the department’s deputies as being guardians rather than warriors, more than 70 percent who saw the decals strongly agreed as opposed to 55 percent who did not see the decals.

“We do so much more than simply enforce the law,” said Lott. “We do enforce the law to be sure, but peace officer is a more accurate description of who we are and what we do. We are keeping the peace. We’re building relationships. And we’re educating the citizens we serve as how best to safeguard themselves from all threats. With the words PEACE OFFICER on our cars, we are getting people to talk about what a peace officer really is. We are changing perceptions and we are redefining what we do and what being a peace officer means to us individually and as a department.”

“This initiative is working, here with RCSD and elsewhere,” she said. “We have presented it to numerous departments nationwide, including police departments, sheriff’s offices, state and federal law enforcement agencies, and we are now in the pilot or planning stages with a dozen or so.”

Broderick says to make the initiative work it has to appeal to the departments. There must be numbers demonstrating that it works. And there must be buy in from the communities.

For more information about the peace officer initiative visit police2peace.com.