Deputy proves to be larger than life 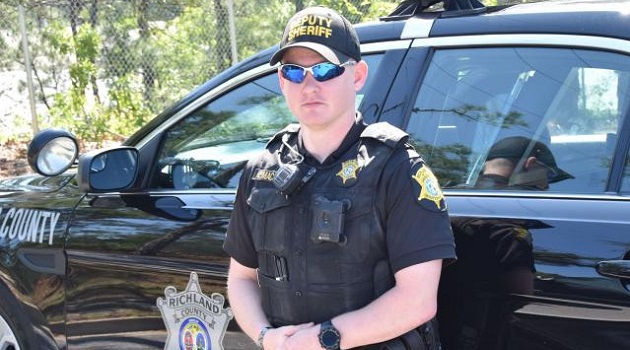 IT’S BEEN SAID THAT DYNAMITE COMES IN SMALL PACKAGES. And it does. Then there is a tiny chip of uranium: Dangerous if mishandled, yet capable of lighting entire cities and more. Perhaps it is that chip of uranium that best describes Richland County Sheriff’s Department (RCSD) Corporal Ryan MacAdams.

At only 4’10,” MacAdams is small in stature, yet extremely able (more so than most), proven under fire, and a never-ending source of light, energy, and inspiration to the many people – good guys and bad – he comes into contact with on a daily basis as one of Richland County’s finest.

MacAdams endured incredible challenges on the front end of life. When he was only 15-weeks-old he was diagnosed with meningitis and only a two-percent chance of surviving. He beat the odds, but as a result of the disease, the growth plates in his legs were stunted and his kidneys began to fail. He beat back the kidney disease, though it returned by his eighth birthday. He again beat the disease. Fortunately and by God’s grace, MacAdams is today a healthy, fit, fully functioning, and accomplished 29-year-old deputy sheriff – a corporal in fact – operating in Region Three.

“Everything is as normal as can be now,” says MacAdams, who has always wanted to be a law enforcement officer.

MacAdams first met Richland County Sheriff Leon Lott when he was eight years old (around the same time he was fighting the second round of kidney disease) during a visit to RCSD headquarters as his mom and grandmother were attending one of the earliest Citizens Academy training sessions. He knew then he wanted to one day work at RCSD.

First forward 12 years: MacAdams was now working at Academy Sports, but his dream was still ever-present. He planned to apply to the S.C. Dept. of Corrections where he hoped to work until he turned 21. Then he would apply to RCSD.

“So I emailed Sheriff Lott and asked if I could use him as a reference for my SCDC application, and his reply was that he wanted to meet with me,” says MacAdams. “The Sheriff asked why I didn’t just come work here. I told him I wasn’t yet 21.”

In May 2012, the Sheriff hired MacAdams for a position in the Records Division. When MacAdams finally turned 21, he entered the Reserve Deputy program. As he was about to graduate, the Sheriff met with him a second time, offered him a full-time position as a deputy, and the rest is history.

A 2015 graduate of the S.C. Criminal Justice Academy and a patrol record that is already as fascinating and colorful as any in the department, MacAdams is best known for responding to a bank robbery call on Aug. 15, 2019, in which he and Capt. Chris Duke survived a harrowing close-quarters shootout with bank robbers in which MacAdams’ vehicle was struck multiple times.

“I often feel like my guardian angel was out there looking over me that day,” says MacAdams.

Though always on the job – as is every deputy – when he’s not patrolling and protecting the citizens of Richland County, MacAdams enjoys spending time with his girlfriend, his mom, and his grandmother. He also enjoys video games – primarily Call of Duty, Battlefield, and sports games – and playing with his two dogs, a German shepherd named Bosco and a black Labrador retriever named Cooper.