DeAundre Pettus: Boxing towards the future 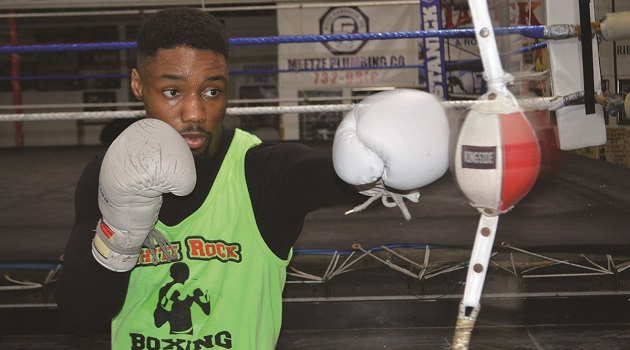 “He’s a heck of an athlete, dedicated to the sport, with great athletic ability.” – Sean Fink, trainer

DeAundre Pettus is an up-and-coming professional boxer working out of the White Rock Boxing facility near Ballentine. The 2017 Golden Gloves winner is looking forward to his fifth professional fight on Saturday, Sept. 4 at the Jamil Temple in St. Andrews. According to his manager, Billy Stanick, Pettus can go far. “He’s a great kid and has the heart,” said Stanick who has been managing fighters for more than 40 years.

Pettus was a defensive player for the Airport High School Eagles football team who went All Regional and was invited to the Shriner’s Bowl. But he likes boxing better. “I’m getting more comfortable in the ring,” DeAudre said. “My first couple of fights were all about nerves but now I’m better and it feels right.”

Pettus know that it matters who you face in the ring. “I’ve been taking on real fighters who have experience,” said Pettus. “My previous opponent was a two-time Golden Gloves champion and I took him out in the third round.”

Now 27 years old, Pettus took the stage name ‘The Dixi Animal’ and he’s ready to step up his game and his commitment.

“Sean Fink has been my trainer and he’s the best,” says Pettus. Fink is a long-time boxing trainer and helped Pettus win the Golden Gloves in 2017. “I’ve known all the trainers,” said Billy Stanick. “I’d put Sean up against anyone them.”

Sean Fink has been training fighters around the Midlands since the early 90s. “I’ve learned a lot over the years at some of the best gyms around the country,” said Fink. “I’ve trained seven Golden Gloves winners and three different World Champions and one Hall of Fame inductee,” Sean says that Pettus is in a growth period right now. “He’s got his toughest fight coming up but he’s learning and dedicated, said Fink. “It’s all starting to come together for him.”

Billy Stanick has his own history. He’s been managing and promoting boxers since 1980 when he had his first show at the Township Auditorium. He even stepped in the ring himself when he was 15 years old and fought until he was 19 and he’s even earned an induction into the Carolinas Boxing Hall of Fame. Today, Stanick serves on their board of directors. White Rock Boxing is Stanick’s facility where world champions and golden gloves alike have trained.

The ‘DixiAnimal’ is planning a move to Philadelphia sometime in the near future where he intends to spar and train with world champion boxers. His goal is to reach the national level of professional boxing and be on the card for bigger and better shows. “I want to prove myself and build my resume,” Pettus remarked. “