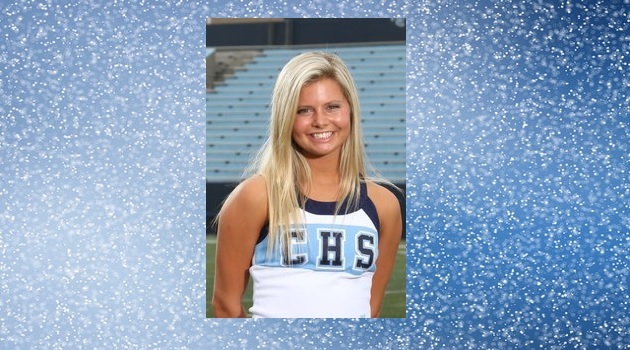 “I’m so honored to receive this award and couldn’t be more grateful to have been on a team with the hardest working group of girls I know,” Miller said. “To achieve this award, I helped lead my team through the many ups and downs we had this season as we tried to maintain the title of reigning 5A State Champions. I tried to lead by example to remind my teammates that both work ethic and attitude are the key to success.”

Miller, who is a senior, has been a part of the Chapin Varsity Cheerleading squad for five years and each of those years the team has won a state championship. Vicki Williams has been her coach and said Sarah is huge support to her teammates.

“As one of the captains this year, she was a huge motivator and encourager demanding excellence from her teammates,” Williams said. “I am so proud of her continued commitment, amazing work ethic, and leadership as a Chapin Varsity Cheerleader.”

Miller is not only an athlete but she is a leader at Chapin High School. She is an honor roll student, serves as Student Body Vice President, is a member of Student Government, National Honors Society, the Academic Leadership Academy, Mock Trial and the Model UN Team.

“I, along with the entire Eagle Family, am incredibly proud of Sarah for being recognized as the South Carolina 5A Cheerleader of the Year,” Chapin High School principal Michael Ames said. “I am acutely aware of the hard work and dedication she put forth with her team this year, and to see her rewarded in this manner shows that it paid off.”