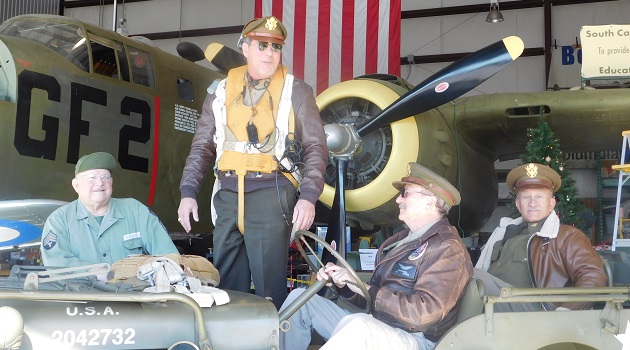 Several Midlands Military History Organizations are coming together to commemorate the 80th Anniversary of the Doolittle Raiders, Sunday, April 24th, from 2 pm to 6 pm, at the Skyline Club on the grounds of the original WWII Columbia Army Airbase at the Columbia Metropolitan Airport. There will also be an announcement about the plans for the upcoming Doolittle Raiders WWII Museum.

The Doolittle Raid was a Top-Secret WWII Military Operation that took place on April 18th, 1942, in retaliation for the Japanese unprovoked attack on Pearl Harbor on December 7th, 1941. The Doolittle Raid was organized and trained at Columbia Airport and practiced bombing runs on the islands of Lake Murray.

The 80th Doolittle Raiders Celebration will start at 2 pm with the presentation “From Pearl Harbor to the Doolittle Raiders” followed by a WWII USO Canteen Style Dance with the Capital City Big Band playing hits from the 1940s. The America Heritage Foundation will display restored WWII military vehicles. Military Timeline Impressions will have several WWII living history volunteers dressed in period military uniforms with displays to interact with the general public. The South Carolina Historic Aviation Foundation will have WWII aeronautics displays describing the military aircraft that participated in this top-secret mission.

“We are going to tell the story of how Columbia, Lake Murray and several South Carolinians played a vital role in the most important military operation in the history of the United States of America,” said Richard Peterson, organizer of the 80th Commemoration Celebration of the Doolittle Raiders.

2022-04-13
Previous Post: VETERAN OF THE WEEK surprised during class at USC
Next Post: Tubing the Congaree to West Columbia’s Riverwalk is a booming business