The power of one little girl 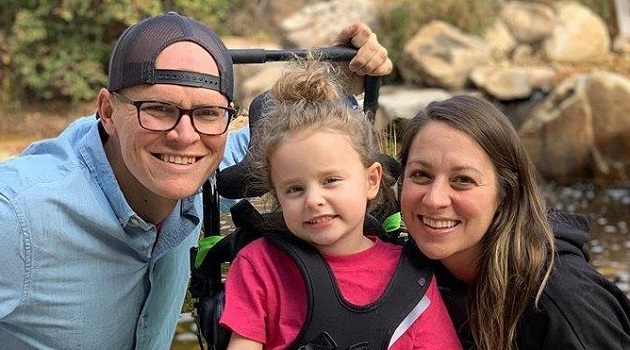 THERE’S SOMETHING TO BE SAID about spiritual interconnectivity within a community of believers. This truth came to light for me as a direct (even indirect) result of the recent dreadful illness of my friend Rob Settle’s four-year-old granddaughter Lucy Settle.

First about Rob: I’ve known him for years. As the executive director of Providence Home – a Christian men’s shelter in Columbia, S.C. – Rob and I have met and talked about God on several occasions. And I’ve been involved with Providence Home in some form or fashion for nearly seven years – delivering food and washing dishes, teaching a men’s Bible study group, writing an article or two about Providence Home, you name it – though most of my involvement was back during the days when I was directing Always Faithful Outreach, a Christian men’s ministry which primarily delivered bread and pastries to the homeless and others.

Last year, Lucy, Rob’s aforementioned beautiful little granddaughter, was struck with a grievous and aggressive form of cancer that attacked her spine and frankly baffled doctors as she was miraculously healed, then the tumors reappeared with a vengeance.

Rob was of course rocked on his heels by all of it, as were all of his family, though none of them have wavered in their faith.

I found out about Lucy’s illness and subsequent traumatic surgery through Rob’s pleas for prayers on social media. That was in early Dec. I immediately phoned my church’s prayer-line (a 24-hour prayer service through Northeast Presbyterian Church). I also reached out to my Sunday School class and asked them to pray for Lucy. We did. She was healed. The surgeons were stunned. The family was celebrating. Lucy was becoming her vibrant little self again. But the dread disease came back weeks later.

By now my Sunday School classmates had seemingly adopted little Lucy into their hearts, as had I. We were all grief-stricken, though nothing like what we’ve all known to be the emotional agony and perhaps spiritual-wrestling within the Settle family.

I also discovered what a small world the family of believers really is.

Six people in my Sunday School class (Dawn and Jim Faber, Sherri and Skid Logan, and Carol and John Pascutti) know Rob personally, and all have known him longer than I have. Nearly all have reached out to me for regular updates. I’ve then been in touch with Rob. A few have talked with Rob themselves. Skid saw Rob on the street in the neighborhood in which they both live and renewed an old friendship.

Last week, friends Lisa and Gary Adams (Gary is the president of my Sunday School class) and their granddaughter Alana delivered meals to Providence Home. There, they met Rob and Providence Home’s development director Adele Little, who Rob has described as “one of the godliest women I know.”

Then there are the other members of my church, all of whom are lifting up Lucy in prayer. Craig Currey, for instance, is the husband of prayer-warrior wife Maria, who I know for a fact has prayed fervently for Rob, Lucy, and the family. Recently, Craig met with Rob and discussed a potential partnership between his much larger homeless facility, Transitions, and Providence Home. I don’t know if this has anything to do with Lucy. But I absolutely know it has to do with God.

My family, including my 85-year-old mom, have all shed tears and prayed for Lucy, Rob, and the family. And in that there have been many discussions, especially with Mom and my 91-year-old stepdad Howard, about God’s love for us, the power and necessity of prayer, the brokenness of this world and the fragility of life.

What’s my point in all of this? That there is a purpose in everything for those who believe. There’s relevancy in our lives, and there is a reason – though we may not understand it this side of Heaven – for the heartbreak and suffering in all of our lives. And sometimes it takes a child – even an innocent little four-year-old girl – to lead us to the Light.