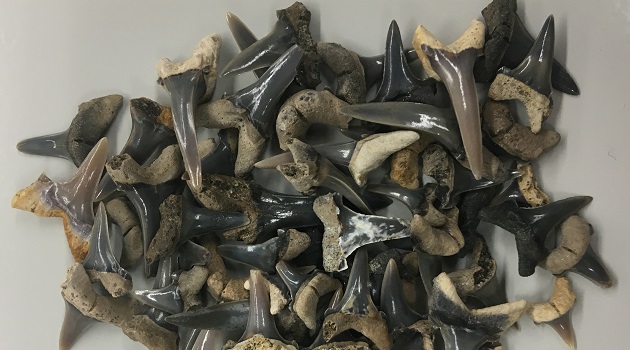 A team of scientists has announced the discovery of two new fossil shark species from the southeastern U.S.

The team is headed by David Cicimurri, Curator of Natural History, South Carolina State Museum in Columbia, along with Jun Ebersole, Director of Collections, McWane Science Center, Birmingham, AL, and George Martin, retired USDA soil scientist from Auburn, AL. The two new species date from the Paleogene Period, roughly 65 and 35 million years ago, respectively, and were named based on hundreds of isolated teeth that were discovered in south Alabama and central Georgia.

The two new species are members of the same genus, Mennerotodus, a group of extinct sharks that were known previously from only Europe and Asia. The older species, Mennerotodus mackayi, was discovered in Alabama and lived during the Paleocene Epoch. According to Ebersole, “this new species appeared just after the extinction of the dinosaurs, and based on the number of teeth we recovered, it was likely one of the more common species in the ancient Gulf of Mexico 65 million years ago.” This extinct shark species was named for John L. Mackay, the initial President and CEO of McWane Science Center and is in honor of Mackay’s lifelong career in furthering informal education.

years ago. This new shark, according to Cicimurri, was named from hundreds of teeth recovered from a defunct kaolinite mine in central Georgia. “These teeth were originally identified as two or three different species”, said Cicimurri, “but our reanalysis of the teeth showed they instead belonged to an entirely new species.” This new species was named for Dr. Dennis Parmley, retired professor at Georgia College and State University, in honor of his contributions to the study of fossils in Georgia.

Before naming these two species, the team of scientists spent months reconstructing the dentitions of these ancient sharks from hundreds of isolated teeth and comparing them to modern species. According to Cicimurri, “by piecing together and examining the dentitions of these new shark species, we were able to determine that they are closely related to modern Sandtiger Sharks, so close in fact, that we were able to use modern Sandtiger jaws to reconstruct them.”

“Like in modern Sandtiger Sharks, the front teeth in the mouths of the fossil species are very tall and fang-like” said Ebersole. “These teeth often project out of the mouth, giving the shark a snaggle-toothed appearance, and were perfect for feeding on fishes, crabs, squids, and even other sharks.” 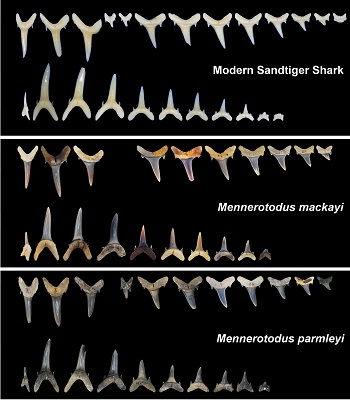 After examining additional teeth from various museum collections, the team was able to conclude Mennerotodus teeth are relatively common in the southeastern U.S. According to Cicimurri, “both shark species can be found in Alabama, and we were also able to confirm Mennerotodus mackayi teeth in Arkansas.”

“These teeth are significant because they represent the first occurrence of Mennerotodus in North America,” said Ebersole, “and because the Mennerotodus mackayi teeth in Alabama are older than those from other parts of the world, it strongly suggests that this group of sharks originated right here in the ancient Gulf of Mexico.”

The study, titled Two new species of Mennerotodus Zhelezko, 1994 (Chondrichthyes: Lamniformes; Odontaspididae), from the Paleogene of the southeastern United States, was published in the open access journal Fossil Record and can be downloaded at https://fr.copernicus.org.