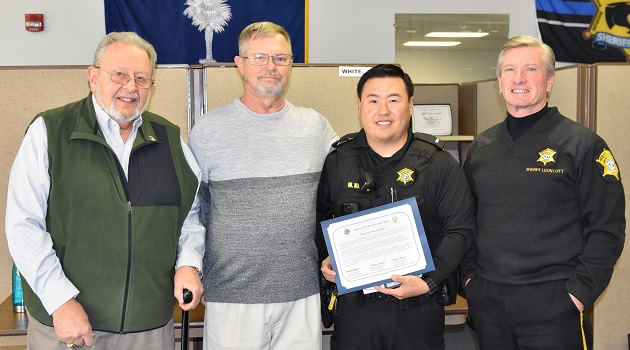 “This is a tremendous honor for Lieutenant Kim, the CAT Team, and our entire department,” said Richland County Sheriff Leon Lott. “It speaks both to our commitment to community outreach and service as well as Lt. Kim’s stellar representation of us all to the many communities we serve here in the Midlands of South Carolina.”

Kim, who has served for more than 10 years as an RCSD deputy – most notably as a CAT Team deputy and supervisor and as RCSD’s unmanned aerial vehicle operator (drone pilot) – has been previously honored by the communities within the county. In 2019, he was recognized by the Charleswood Neighborhood Watch for “outstanding dedicated service.”

The citation for Kim’s most recent award notes his strength of initiative, sense of ethics, respect for and knowledge of the law, common sense, communication skills and even-temperedness. The citation also points to his service to the county’s growing Korean population as RCSD’s liaison to that community. Kim speaks Korean fluently (many of the department’s deputies and supervising officers are also bilingual).

“It is an honor and a blessing to be recognized by the Knights of Columbus,” said Kim. “Helping the community is something I truly enjoy and am looking forward to continuing my service to the citizens of Richland County. “

Founded in 1882, the Knights of Columbus is a Roman Catholic fraternal and charitable organization with more than 16,000 councils and assemblies worldwide. The Columbia-based Bishop England Assembly (also known as Assembly 1072) is named for 19th century Bishop John England, the first Catholic Bishop in Charleston, S.C.

– Pictured L-R are Michael Mancari and Don Van Borsch, both with the Knights of Columbus; Lt. Marcus Kim; and Sheriff Leon Lott.