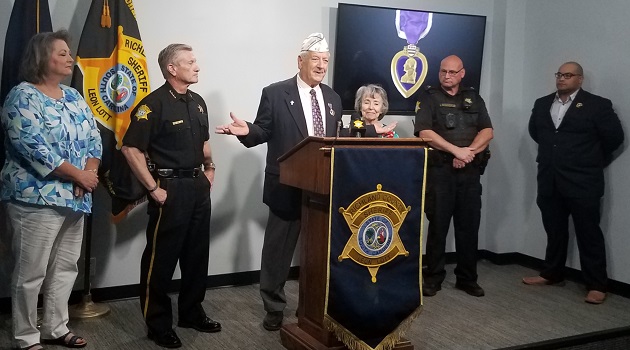 Held three days before Memorial Day in which the nation honors its fallen soldiers since 1775, the gathering included Sheriff Lott; Mr. James Miller, state commander of the Military Order of the Purple Heart; Mrs. Donnell Baker, wife of the late Master Sergeant John Baker (Medal of Honor recipient); Mrs. Diane Rawl, mother of the late RCSD Deputy Ryan Rawl (who lost his life while serving as a soldier in Afghanistan); and two RCSD deputies – Corporal John Rosenberger and Deputy Allen Makinson – both of whom were wounded during military service in Afghanistan.

“We here at the Richland County Sheriff’s Department have a rich tradition of military service,” said Lott, who also serves as pres. of the Palmetto State chapter of the Association of the U.S. Army and as commander (brigadier general) of the S.C. State Guard. “There are a lot of men and women here who have served in the military, and they are all very special to us. We are proud, not only of the service they have rendered to this country, but the service which they continue to provide the citizens of Richland County.”

Numerous Purple Heart recipients from around the state, including chapter presidents and other officials, were also present as the proclamation was read.

“Richland County and the city of Columbia has always been said to be the most military-friendly community anywhere and we are because we value those who serve and so we thank them,” said Lott.

Founded in 1932, the Military Order of the Purple Heart is headquartered in Washington, D.C. with approximately 45,300 members all of whom are recipients of the Purple Heart. The Purple is the nation’s oldest decoration – originally a medal of merit – today awarded to recipients who were either wounded or killed as a result of actions against an armed enemy of the United States.

Though member numbers of the official military order are fewer than the actual number of Purple Heart recipients, officials say more than 1,000 South Carolinians are members of the Military Order of the Purple Heart with 12 chapters located across the state. The Columbia chapter, with 200-plus members, is the state’s largest.