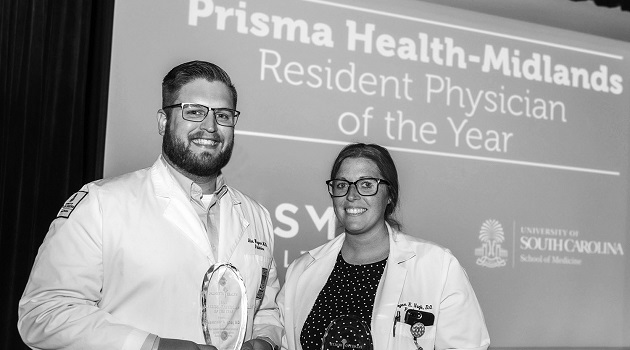 Megan Nagle, D.O., psychiatry resident physician and Alex Wagner, M.D., pediatrics resident physician, are the 2019 Prisma Health–Midlands Resident Physicians of the Year. They were recognized at the annual medical and dental resident physician’s graduation event in June. The award, established in 2002, recognizes physicians’ medical knowledge and abilities, as well as their commitment to Prisma Health’s values of compassion, dignity, excellence, integrity and teamwork. Both honorees received a plaque, a certificate and a cash award.

This is only the second time two residents have been selected to receive the annual award. The Richland Memorial Hospital Board of Trustees choose the honoree(s) from nominations submitted by residency program directors.

Nagle completes her fourth year of graduate training in general psychiatry as chief resident and will join the Prisma Health–Midlands/USC School of Medicine psychiatry department. She was nominated for the award by Ashley Jones, M.D., residency program director for general psychiatry.

In her nomination, Jones wrote, “Dr. Nagle is an exception person, physician, and psychiatrist. She is a hardworking, honest, and humble leader who is well-respected and has contributed significantly to the success of our program and to improving the lives of her patients. You can see her dedication through mentorship, teaching, leadership, clinical care, and research. I feel fortunate that she has chosen to take a position within our psychiatry department. Our program and our institution will continue to benefit from having her on our team.”

The impact of Nagle’s leadership in the residency program will be sustained by her new role as a faculty member and the curriculum enhancements she proposed with feedback from her fellow residents. Jones praised Nagle’s ability to treat her patients with dignity, and the respect and compassion she models as a physician and mentor. “She demonstrates this regularly through her ability to listen, to include patients and partner with them throughout treatment, and in her constant efforts to mentor and leave this program a better place after she graduates.”

Wagner completes his third year of graduate training in pediatrics and will stay in Columbia to begin a fellowship in sports medicine with the Prisma Health–Midlands/USC School of Medicine. He was nominated for the award by Robert Holleman, M.D., program director for pediatrics residency.

Holleman wrote, “Alex Wagner exemplifies the word integrity. All of his efforts to help others are in no way self-serving. He is honest and forthright and is highly professional always. His drive for child advocacy is not motivated by a desire for recognition. . .but instead by a genuine passion for improving the lives of children.”

Additionally, Holleman praised Wagner’s profound respect for patients, families, staff, students, peers, and faculty. “He is committed to bettering others around him never putting himself first. He has a constant awareness of patient diversity and always has the patient’s best interest in the forefront of his decision making.” Holleman noted Wagner’s talent for finding creative ways to overcome potential barriers to care and said, “Alex is also consistently praised for excellence in patient care including his clinical poise and decision making.”

Featured Photo: Alex Wagner, M.D., and Megan Nagle, D.O., were selected for the Resident of the Year Award by the Richland Memorial Hospital Board of Trustees.