By: John
In: Civic 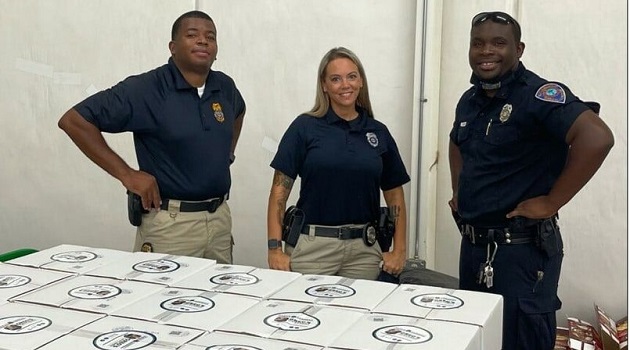 At an event to celebrate the growth of Greg’s Groceries, a police-community relations program started by Serve & Connect, a Columbia, SC-based non-profit, AT&T and FirstNet presented the organization with a $125,000 contribution to further expand the reach and impact of Greg’s Groceries.

In the last twelve months, Greg’s Groceries has experienced significant growth, with delivery currently in 47 percent of South Carolina counties and actively working with more than 36 police partners.

“We really see first responders and their support, not only as an honor but an obligation. We see Serve & Connect as a bridge for the police and the community relationship,” said Amanda Taylor, SC regional director for AT&T.

“SLED is honored to partner with Serve & Connect in a continued effort to support community policing in South Carolina. Our Community Relations agents are integrated into communities across the state to provide support to local agencies and the communities they serve. Serve & Connect provides the necessary tools, especially Greg’s Groceries, to assist our efforts in bringing the community and police together,” SLED Chief Mark Keel said.

Officers showed their continued commitment to Greg’s Groceries program while also honoring the memory of Forest Acres Police Officer Greg Alia on the 6th Anniversary of his death. Alia was killed in the line of duty on September 30, 2015. Greg’s Groceries is named after Officer Alia.

Departments and officers were recognized for their outstanding work with Greg’s Groceries program over the last 12 months. Timmonsville Police Department, which was among the departments that delivered the most boxes so far in 2021.

“Initiatives such as Greg’s Groceries are important for building trust within a community,” according to Timmonsville Police Department Chief Thomas McFadden. McFadden wanted his department involved because he wanted his officers interacting with the people they serve in a positive setting.

“I like to bridge the gap between the community and law enforcement. I think somewhere in the past few years that got lost,” Timmonsville Police Department Chief Thomas McFadden.

Once the packing event ended, police agencies took boxes of Greg’s Groceries to their local communities for officers to deliver to families and people in need.