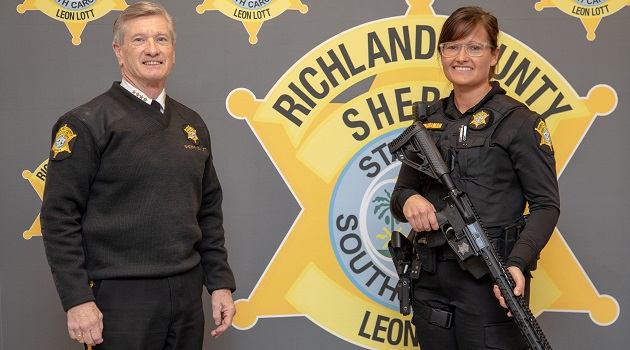 Richland County Sheriff’s Dept. (RCSD) Deputy Sarah Merriman was presented the highest departmental honor – DEPUTY OF THE YEAR 2020 – during RCSD’s annual awards ceremonies, Wed. Jan. 13, 2021: But not before receiving Deputy of the Year for RCSD’s Region Four and the department’s coveted Medal of Valor.

According to her Medal of Valor citation, on Nov. 19, 2020, while responding to a “domestic dispute with [a person armed with] a weapon,” Merriman encountered the male suspect brandishing a shotgun and “in a very agitated state.” The suspect was shouting at the deputy and calling for her to shoot him.

“I thought this could take a really bad turn,” Merriman told WIS-TV in December. “I was thinking that the worst-case scenario that you never want to happen could possibly happen.”

Richland County Sheriff Leon Lott had nothing but praise for Merriman’s actions. Reviewing the body camera footage, he explained, “Deputy Merriman was simultaneously dealing with a crime and a person in crisis. She would have been justified in pulling her own weapon, but that was precisely what the suspect wanted her to do, and she recognized that.”

In addition to her three awards, Merriman was presented an AR-15 rifle from U.S. Patriot Tactical as well as a check in the amount of $1,000 from the Richland County Sheriff’s Foundation, a non-profit organization that fully funds the annual RCSD awards, which are usually presented during RCSD’s Christmas awards banquet.

The 2020 banquet was cancelled as result of the COVID pandemic, but Lott says he is hopeful there will be another awards banquet near the end of 2021. “These presentations are a necessary means by which we honor the best of the best each year,” said Lott.

In addition to Merriman’s awards, Ms. Bunnie Harris was the recipient of RCSD’s Civilian of the Year 2020.

Myriad additional awards were presented throughout the morning and early afternoon at RCSD’s Region Two headquarters facility. Among those awards were a second Medal of Valor, a Threat Suppression Award for Excellence, Athlete of the Year, Award of Courage, Drug Enforcement Award, Military Deputy of the Year, Narcotics Agent of the Year – each receiving $500 – several Deputies of the Quarter (for the final quarter of 2020), recognition for retirees and volunteers and other honors.

The awards ceremonies were held in staggered shifts with limited numbers of attendees present for social distancing purposes. Among those present were family members of now-deceased RCSD deputies who – because of their exceptional service to the department, the county, the state, or the nation – have had awards named in their honor. For instance, Mrs. Diane Rawl represented her late son Deputy Ryan Rawl who as a member of the S.C. Army National Guard lost his life in Afghanistan in 2012. Today, the Military Deputy of the Year award is officially the Ryan Rawl Military Deputy of the Year award.