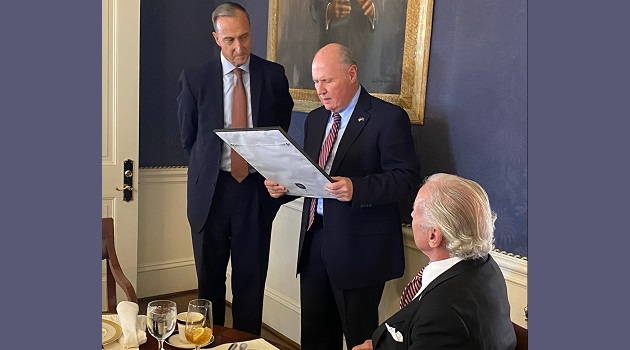 This month – November – is Veterans Month, perhaps my favorite month of the year as we celebrate both the Marine Corps birthday (Nov. 10) and Veterans Day (Nov. 11) followed by Thanksgiving, the beginning of Advent and so much more. And what better way to ring in the month than with an invitation-only luncheon at the S.C. Governor’s Mansion on November 1.

Though it easily could have been, the purpose of the noonday gathering was not a heralding of Veterans Month. The purpose was to honor a truly great military leader whose name may not be familiar to most, but whose singularly profound work in terms of the post 9/11 legal proceedings has quite literally made the nation and the world a safer place.

Hosted by Governor Henry McMaster and First Lady Peggy McMaster, the luncheon was held in honor of the newly retired Brig. Gen. Mark Martins, a West Point graduate (first in his class), a Rhodes Scholar, a graduate of Harvard Law, a U.S. Army Judge Advocate General’s (JAG) Corps officer, and the chief prosecutor of the Office of Military Commissions overseeing the trial of 9/11 terrorist mastermind Khalid Sheik Mohammed and four terrorist co-defendants (the cases are ongoing).

In the final years of his four-plus decades of distinguished service, Martins has been the lead U.S. Army lawyer in the Military Commissions for years, and the luncheon held in his honor came about coincidentally 20 years and nearly two months following the attacks of Sept. 11, 2001.

Mullikin who initially proposed and – together with the Governor, the First Lady and their staff – helped organize the luncheon, wanted to honor Martins in a special way.

The 20 select luncheon guests included six general officers (including the current and previous adjutants general of South Carolina); one state senator; of course Gov. and Mrs. McMaster; several colonels (U.S. Army, U.S. Marine Corps, and S.C. Military Department); the Civilian Aide to the Secretary of the Army; the secretary of the S.C. Department of Veterans Affairs; the dean of the University of South Carolina School of Law; the dean of USC’s College of Hospitality, Retail and Sport Management; the director of Columbia International University’s (CIU) chaplaincy program; and others.

The luncheon in the Mansion’s State Dining Room was preceded by a brief reception in the Mansion library and followed by remarks, an awards presentation, and a post-lunch photograph snapped in the Large Drawing Room.

S.C. Senator Thomas Alexander presented Martins with both a Senate resolution and a Senate commendation.

A portion of Martins’ Senate commendation reads: “The South Carolina Senate recognizes your extraordinary post-9/11 work, including service with Multi-National Force–Iraq, later as deputy commanding general of Joint Task Force 435 in Afghanistan, followed by the Rule of Law Field Force–Afghanistan, and ultimately Chief Prosecutor of Military Commissions … Your lifetime of service and the overall body of work will, for at least the next several decades, set the standard for all attorneys and legal officers – military and civilian alike – and will serve as a beacon for a better understanding of the legal process and the rule of law for future JAG officers from all U.S. Armed Forces for many years to come.”

The Governor’s Mansion, by the way, is the former officers’ quarters for the Arsenal Academy, part of the S.C. Military College, which prior to the American Civil War included both the Arsenal Academy in Columbia and the Citadel in Charleston.

EDITORIAL NOTE: The following morning after successfully defending his dissertation, Mullikin was awarded a doctoral degree from Columbia International University.

2021-11-15
Previous Post: SafeTALK about the real threat of suicide
Next Post: IRONMAN: A Missouri veteran reflects on a unique title and a distinct S.C. honor