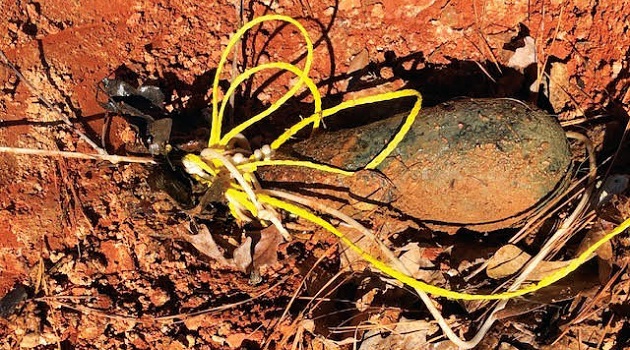 On Sunday, January 23, divers from the South Carolina Law Enforcement Division and South Carolina Department of Natural Resources found a military ordinance round which was identified as an 81-millimeter military mortar round by the United States Air Force EOD detachment.

A fisherman using a casting net near Black’s Bridge on Hwy 391 snared the mortar round earlier in the week and released it after identifying it as potentially dangerous. The angler notified authorities immediately and the search began for the ordinance.

The search was made more difficult due to the amount of debris from the aging bridge and surrounding area. The round was estimated to be in 30 to 35 of water with zero visibility.

According to the Newberry County Sheriff’s Office, after being recovered from the Lake floor, the ordinance was isolated on the shoreline of Lake Murray in Saluda County and detonated without any damage or threat to the community. The 81-millimeter mortar round was buried and covered with sandbags and then detonated by the United States Air Force EOD. There was a slight delay in traffic being allowed to cross Black’s Bridge (SC Hwy 391) out of the abundance of caution.

Law Enforcement states that it is hard to say the age or length of time the ordinance was in the lake, but thanks the angler for his actions and quick reporting in an effort to protect the community of Lake Murray.

Authorities ask the public that if they encounter what appears to be a military ordinance and is not sure of its safety should immediately notify their local jurisdiction for action.