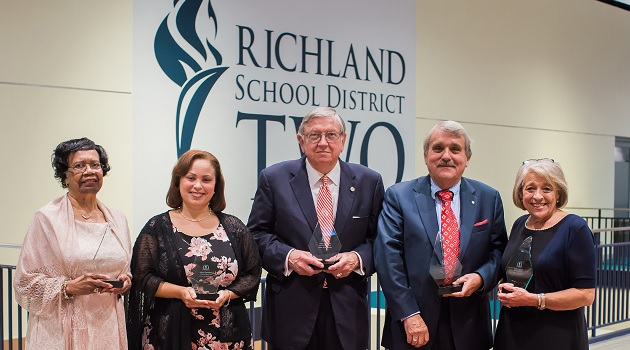 The Order of the Flame was established by the Richland Two Education Foundation to recognize graduates, former employees and friends of Richland School District Two. These individuals’ civic, professional or volunteer activities have enriched the lives of others through their significant contributions of time, talent or resources. The awardees were nominated by members of the community.

“Awardees of the Richland Two Order of the Flame have represented the district with honor, humility and high moral standards,” said Amy Cain, President of the Education Foundation. “We are privileged to have the opportunity to acknowledge these individuals for the lasting impact they have made on the lives around them as well as the future of Richland Two.”

Anna Love Boyd was a nurse and leader in the State Park community who made education a priority for its residents. She paid the first $5 towards the purchase of what became the Anna Boyd School, one of the first primary schools for African-American children.

Annie Hanberry dedicated 50 years of her life to education. She was the first principal of Bethel High School and the first African-American female principal in the state. Under her leadership, Bethel was among the first schools in South Carolina to receive accreditation from the Southern Association of Colleges and Schools. In 1967 Bethel was renamed Annie E. Hanberry High School.

Dr. John Hudgens, a much loved and well-respected educator, served as principal of Spring Valley High School, the only high school in the district at that time. He was also the first principal of Richland Northeast, rose to Assistant Superintendent and then was named Richland Two’s Superintendent. Under his leadership, Richland Two had the highest percentage of Blue Ribbon schools in the nation for school districts of its size.

John Monroe’s vision and love for the Northeast community led to the creation of the Sparkleberry Country Fair in the mid-1990s. In the 23 years since the fair began, Richland Two has benefitted greatly from fair proceeds. Almost a million dollars have been awarded for teacher grants and college scholarships. Mr. Monroe’s unique and successful partnership with Richland Two will live on for years to come.

Gwen Smythe started as a homeroom volunteer, which turned into a lifelong love and friendship with Richland Two. Among the many hats she has worn are as PTA president and vice president, founding member and president of the Spring Valley Wrestling Booster Club and founding member of the Spring Valley Education Foundation Auction committee. She chaired the Bond Referendum Committee in 1987 and served as a committee member for the next two bond referendum elections. She was also a founding member of the Sparkleberry Country Fair.

The Order of the Flame Gala, honoring the recipients, was held November 8 at the Richland Two Institute of Innovation.