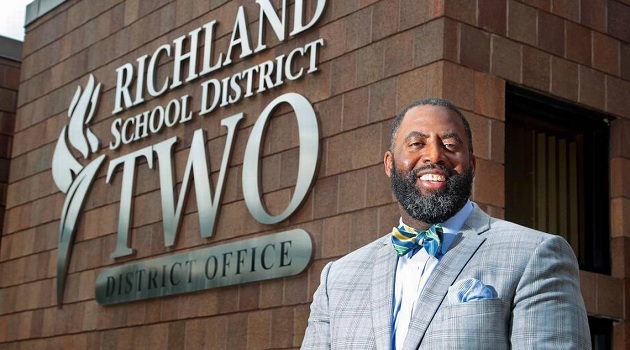 Richland 2 Superintendent Baron Davis received “An Overall Distinguished Evaluation” by a unanimous vote from the Richland 2 School Board at the August 13 meeting.

He received a two-year extension to his contract, which will continue his tenure to 2023. He received a 12.3 percent salary increase and a 2.5 percent increase in his annuity credit.

Davis, the first African-American to serve as superintendent in Richland 2, has served in that post since 2017.

But there was some disagreement among board members about his contract terms.

Both board members said they strongly support Davis, but disagree with such a strong vote requirement.

The contract amendments were approved by a majority vote of the board.

Davis expressed his thanks for the evaluation to the board, the district’s teachers and staff, and the Richland 2 community.

During public comments at the end of the meeting, Davis said he felt that his role as superintendent is something, “I was called to do,” and looks forward to the future.

“I can’t thank you enough for the confidence you have in me,” he said. “We have made tremendous progress.”

The board approved a long list of policy revisions recommended by the state, but two board members sought revisions in a policy they said allowed too much access to personal records by district staff. After a long discussion, the board approved the original policy despite the opposition.

During the public comment period the board heard a request from a track and field coach to consider more staff training in emergency response so that the district is better prepared to deal with accidents and health emergencies that could happen at athletic events.

During the special recognition period, the board recognized Nona Montoya of the district’s operations office for her selection as the 2019 Olive T. Ritchie Educational Office Professional of the Year.

LaChe Williams of L.W. Conder Elementary Schools was recognized for her selection by the S.C. Association for Supervision and Curriculum Development as an “Emerging Leader.”

Jennifer McLeod-Crady of Ridge View High School was recognized for her selection as South Carolina Academy of Science Teacher of the Year.

Dr. David Degenhardt of Ridge View High School was recognized as a state finalist for the Presidential Awards for Excellence in Mathematics and Science Teaching.

Pontiac Elementary was recognized as The Leader In Me Lighthouse School.

Board member Teresa Holmes was recognized for achieving Level 2 Boardmanship, and Amelia McKie for Level 5 Boardmanship in the state’s board member training program on educational issues.