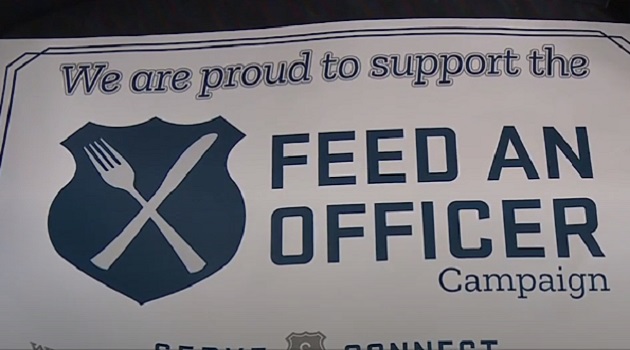 Forest Acres police officer Greg Alia was killed in the line of duty September 30, 2015, and is remembered as a hero and for how he lived and served: with compassion and respect.

The Feed An Officer campaign is an annual effort to express the community’s gratitude and appreciation for service of their local law enforcement officers. After the collection drive, which ran November 24 – December 9, the funds provided numerous police stations with either a catered lunch or a gift certificate December 14. Every dollar donated goes directly back to local restaurants who provide this lunch.

“It is an honor to see my husband’s name live on in the way we bring people together to show love and support to police officers and their families,” said Kassy Alia Ray, founder of Serve and Connect. “This effort would not be possible without the time and passion of many, especially our Feed An Officer volunteer team and the restaurants who gave so much to help us serve those who serve us.”

Since 2015, the campaign has provided lunch to more than 1,300 officers and provided more than $22,000 in gift certificates for off duty officers to area restaurants.

“Greg Alia Day and the Feed an Officer Campaign help us to see that there’s a huge community of people that support and appreciate the job our officers do every day,” said Leah Shumard, wife of Lt. Russ Shumard with Forest Acres Police Department. “It’s an amazing blessing to our family to see the love and service officers like Russ have given be returned to them. It not only encourages officers, but their families as well.”

Serve & Connect thanks the many restaurants who make this effort possible, including: