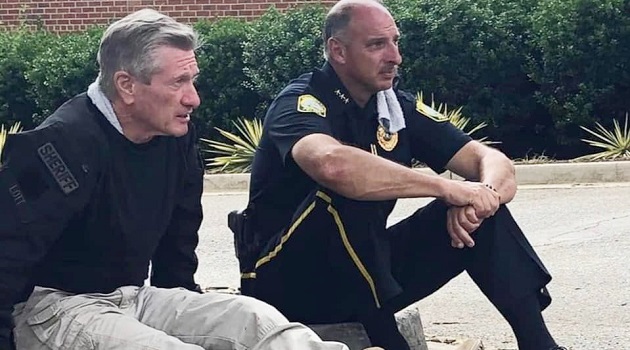 For the past several years, the multi-agency Midlands Gang Task Force (MGTF) in central South Carolina has been aggressively and successfully disrupting and dismantling illegal gangs operating throughout the capital city of Columbia and surrounding communities. The task force has done so by means of combining single agency resources, expanding communication – through increased information and intelligence sharing – better productivity and a decrease in duplication of effort.

A parallel entity, the Midlands Fugitive Task Force (MFTF), has operated as an investigative unit, also multi-agency, with a basic mission of locating and apprehending violent criminals.

In June 2021, the MGTF and the MFTF joined forces to form the Midlands Gang and Fugitive Task Force (MGFTF). The announcement was made during the MGFTF’s quarterly meeting held at the Richland County Sheriff’s Department’s (RCSD) Region 2 substation, July 28.

“Combining both task forces alleviates any manpower concerns as well as any duplication of effort because most gang members fit into the ‘violent criminal’ category,” said RCSD Capt. Vincent Goggins, commander of the MGFTF. “This new merger also enables us to more effectively support smaller partnering agencies which may not have the resources to host a full-time fugitive team.”

Deputy Chief Chris Cowan, commander of RCSD’s Operations Division, believes that by merging the MGTF and the MFTF, member agencies are better able to draw upon the talent, skills, information, and resources of one another and “more effectively align those resources to aggressively pursue the bad guys,” he said.

Cowan added: “This merger is a reflection of [Richland County] Sheriff Leon Lott’s holistic approach to policing. By combining the two task forces we now have a more centralized command structure while simultaneously bringing to bear the operational capacities of what each member agency has to offer, and in the case of RCSD that means our patrol units, K-9s, Special Response Team (SRT), explosive ordnance disposal team, as well as incident management and crisis management capabilities, aviation and waterborne units, investigations, intelligence, and our laboratory.”

In one recent example, the U.S. Secret Service, one of the MGFTF members, was able to quickly and seamlessly draw upon the resources of other member agencies including RCSD to successfully conduct a high-risk operation on a specific location in Richland County involving illegal weapons, drugs, and counterfeit money.

“They asked for our assistance,” said Cowan. “We gathered and provided intelligence on that location and what we believed the risks were, what needed to be done to mitigate those risks to the surrounding community. We secured the location, secured the suspects, and secured the evidence in that order.”

“This multi-agency partnership is unique because there is no other like it in the Palmetto State, and no other like-task force that I am aware of nationwide that brings to bear the resources of local departments with state and federal partners under one roof,” said Goggins.

“We are a truly unique task force,” Lott said. “But we are seeing other regions across the state and the southeastern United States looking at what we are doing and have been doing as a model for their own law enforcement agencies.”

Public education has also been key in preventing and combatting gang activity in central S.C. The Richland County Sheriff’s Department component of the MGTF has often made presentations to area civic clubs and other organizations, hospitals, even the S.C. Military Department. The educational awareness piece will continue under the new MGFTF.

“Our citizens, especially those living and working in our most vulnerable communities are essential partners in all that we are doing,” said Lott.

– Pictured are Sheriff Leon Lott (left) and Columbia Police Chief Skip Holbrook taking a breather during the May 30-31 rioting in Columbia, S.C.