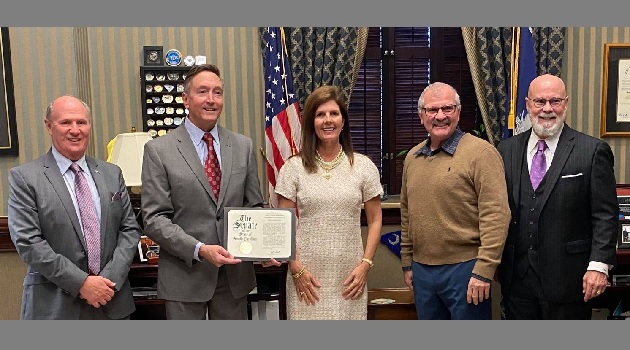 Bruce Brutschy, noted self-defense and fitness instructor and a member of the S.C. Black Belt Hall of Fame, received a S.C. Senate Commendation from Sen. Thomas Alexander, Thurs. Jan. 14, 2021. The awards ceremony was held in the offices of Lt. Governor Pamela Evette in the S.C. State House complex.

According to news reports from 2004, Brutschy followed a fleeing robber in his vehicle, cornering him in the parking lot of Whitney Hotel. The suspect – a 6’5” 240-pound man previously charged with three counts of armed robbery and assault and battery – rammed Brutschy’s car in an attempt to flee.

“Brutschy was worried the suspect was getting desperate and got out of the car to stop him,” reported WIS-TV on May 11, 2004. Brutschy added: “As I tried to get in the door, he started to reach under the seat, I thought he was going for a gun, so I went ahead and hit the window out, pulled him up, and I think he popped me one right there. We struggled, and he ended up on the ground. I held him until police got there.”

“Bruce is the kind of man that truly exemplifies all that is noble and courageous in a South Carolinian,” said Mullikin, who is also a S.C. Black Belt Hall of Fame inductee. “The fact that he is also a man of tremendous grace and humility speaks volumes about who he is and how well he represents this state.”

A portion of Brutschy’s Senate Commendation reads: “This honor is also indicative of your many years of sterling leadership and tireless service to to the people of South Carolina – hundreds of whom you have personally and pro-bono trained in self-defense tactics and techniques solely for their protection – as well as the guidance, direction, and inspiration you have provided to the state’s and nation’s martial arts, law enforcement, and military communities.”

– Pictured from left are Alexander, Brutschy, Evette, Genova, and Mullikin.