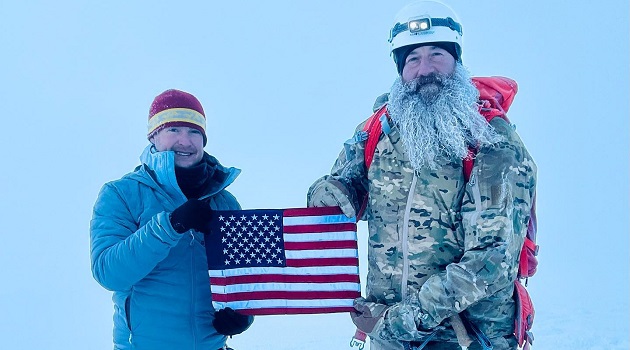 Thomas Mullikin Jr., son of the world-renowned global expedition leader Dr. Tom Mullikin, led a team of mountaineers to the top of Mount Chimborazo in Ecuador, earlier this month. It was not the first expedition the younger Mullikin has led, but easily one of the most arduous as Chimborazo (at 20,549 feet in elevation) is actually higher up into Earth’s atmosphere than Everest (29,032 feet), a result of the “Equatorial bulge.” Both Mullikins have been to Everest too.

“Nothing makes a father happier than seeing his children doing well,” said the elder Mullikin, who himself was enroute to the Galápagos as Thomas Jr. was braving the cold and wind of the famed South American summit. “Thomas Jr. has been climbing and diving with me all of his life – often leading our expedition teams – so this is as natural for him as it would be for any equally accomplished mountain team leader anywhere in the world.”

Said to be “pound-for-pound one of the strongest load-bearers” on any of the Mullikins’ previous expeditions, the younger Mullikin is a graduate of the University of South Carolina, the president of the Mullikin-founded Global Eco Adventures, director of public affairs for the Camden, S.C.-based Mullikin Law Firm, and a former officer in the S.C. State Guard which his father once commanded at the two-star rank of major general. Thomas Jr. also holds a second-degree black belt and is an instructor in traditional karate.

The senior Mullikin is a former U.S. Army JAG officer, having served in the U.S. Special Operations Command. He is chair of the S.C. Floodwater Commission, a university professor, and an energy-environmental attorney.

For much of his life, Thomas Jr. has joined his father on SCUBA diving ventures and mountain climbing excursions around the globe, including climbing four of the world’s seven great summits and surrounding ranges.

“As regards my climbing and diving around the world, I love it,” says Thomas Jr. “As a boy, my father lit a fire in me for the world around us that will never be extinguished.”

Mount Chimborazo is the point on the Earth’s surface that is farthest from the Earth’s center and the highest point from the planet’s surface and up into the atmosphere. It is also part of the Mullikin-named and planned (also with Dr. Diego Quiroga Ferri of the Universidad San Francisco de Quito) HUMBOLDT TO DARWIN expedition. The expedition, as it is mapped out, begins on Chimborazo with a trip down the mountain on mountain-bikes (off-road bicycles) following the Inca Trail through the Andean highlands to a specified point, then kayaking to the coast before taking a short flight to the Galápagos archipelago made famous by 19th-century naturalist Charles Darwin.

Thomas Jr. led the recent Chimborazo expedition at the head of a crack team of former and retired U.S. military special operators.