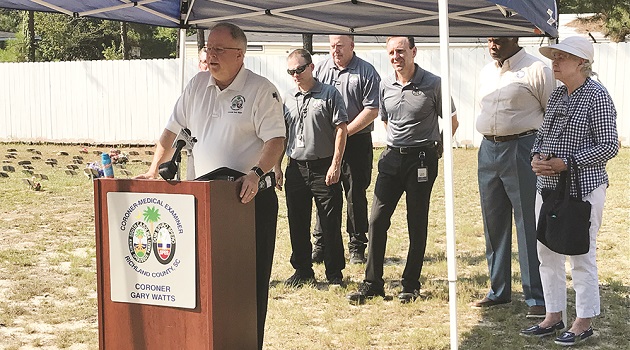 The Coroner’s Office unveiled the first round of improvements made at the Richland County Cemetery during a re-dedication ceremony Tuesday morning.

A new fence surrounds the cemetery, which serves as a final resting place for those whose remains are either unidentified or unclaimed or whose families cannot afford a burial.

County Councilman Calvin “Chip” Jackson helped fund the project using discretionary money from the County’s budget. He said the improvements are a way of paying respect to the deceased and ensuring that residents’ families know their loved ones are being put to rest in a dignified manner.

“I felt that (the project) ought to be reflective of what Richland County is reflective of, and that is the kind of compassion and kind of respect and dignity we want to show both to our neighbors who are alive and those no longer with us,” Jackson said.

Between 75 and 100 people are interred at the cemetery each year, which now holds upwards of 700 people. The Coroner’s Office hosts three or four services annually to honor those newly laid to rest there. That practice began nearly 20 years ago when Coroner Gary Watts took office.

“I think it’s our duty as human beings to make sure that we treat these people, regardless of their circumstances in life, with respect and dignity in death,” Watts said. “That’s a personal choice of mine, and I think it’s the right thing to do.”

Beautification efforts at the cemetery have been a Coroner’s Office priority for the past several years.

Part of the cemetery previously sat on land owned by neighboring manufacturer FN America. The company donated the land to Richland County to make the fence installation and other upcoming improvements possible.

“We’re very pleased to be able to offer our support to the Coroner’s Office for their efforts to provide a dignified final resting place for those citizens of Richland County who are less fortunate,” said Scot Fischer, vice president of operations at FN America. “It’s a real positive to see all the support going on and the improvements being made to this cemetery.”

Now that the fence is complete, a second round of improvements can move forward with help from the community.

Local Boy Scouts plan to build a gazebo to give visitors a place to sit when they visit loved ones interred at the cemetery, and members of The Basilica of Saint Peter will begin planting trees and flowers around the outside of the site this fall.

“Everyone coming forward and stepping up to the plate to make this a very nice final resting place has been very important to me,” Watts said. “I can’t say how humbling it is to me to be part of that.”