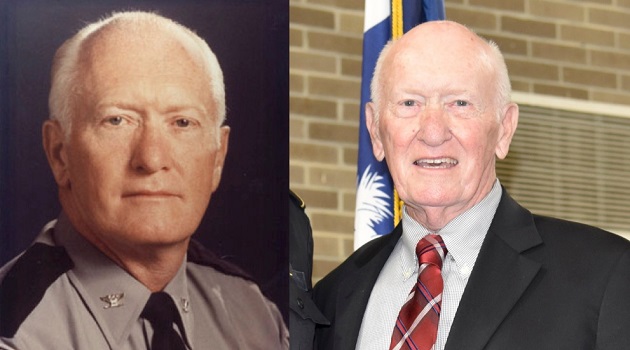 Former commander of the S.C. Highway Patrol passes away at 85

Almost everyone from South Carolina has a Colonel Joseph H. “Red” Lanier story. My late father knew him, though not well, but often spoke of Col. Lanier with great respect and admiration. My boss – when I was a teenager – John R. Davis knew him well and they were friends. And one of my current bosses, Richland County Sheriff Leon Lott, knew him very well. In fact, for the past 20 years, Col. Lanier worked for Sheriff Lott at the Richland County Sheriff’s Dept. (RCSD) after Lanier retired from the S.C. Highway Patrol which he commanded during the latter part of his 34-year career as a state trooper.

Col. Lanier, 85, who passed away Sunday, March 21, 2021, was one of those generational gems, full of great stories, always enjoying and willing to share them, and with a family history that is inextricably woven into the broader history of the Palmetto State.

Col. Lanier was born in 1935. He worked and played sports while attending Eau Claire High School. He graduated Eau Claire in 1953 and right away joined the U.S. Marine Corps.

Following boot camp at Parris Island, S.C. and infantry training school, Lanier “shipped” as we say to the west coast and was soon participating in some of the world’s toughest training for amphibious reconnaissance missions (before there was a Marine Force Recon) as he prepared for deployment and at least one classified operation overseas.

During that mission, Lanier recalls being temporarily separated from his fellow Marines.

“I had to swim back to the submarine,” Lanier said. “It was an old World War II diesel-powered submarine [tasked with inserting and extracting the Marine Recon team]. I was wearing nothing but my skivvies with a K- Bar knife strapped to me.”

Why? That’s another story. And Lanier had many that he always told with a broad smile.

It was also during Lanier’s time in the Marine Corps that he survived a deadly helicopter crash. He became a sergeant of Marines at only 18-years-old, and he later played football at the University of South Carolina back when USC fielded a junior varsity squad.

Lanier joined the S.C. Highway Patrol (SCHP) in 1957. To suggest that his three-plus decades at SCHP were anything but extraordinary would be understating that tumultuous albeit evolutionary history of law enforcement in South Carolina from ‘57 through the early 1990s. That period was also marked by stellar advances in modern policing that are, today, largely taken for granted. Lanier, for instance, was one of the key leaders tasked with organizing and training SCHP’s first SWAT (tactical) team. He also implemented the first physical fitness training standards for all highway patrolmen (today widely referred to as state troopers).

It was during his years at SCHP, that Lanier along with his friend Clebe McClary – the celebrated writer, speaker and decorated Marine officer – organized the Police Olympics. Lanier also found time to play semi-pro baseball for the Dillon (S.C.) Red Legs and semi-pro football for the Dillon Redskins. “I’ve always loved sports,” he said.

Upon retiring from SCHP in 1990, Lanier was hired by Am-Pro Protective Agency as vice pres. of security operations. He then worked for American Security before joining RCSD in 1999.

“I had for years known and long-admired Leon Lott since the days when he was working in narcotics and I was at the Highway Patrol,” said Lanier during a conversation I had with him in 2018. “So, for me, the Richland County Sheriff’s Department was and is a very comfortable fit.”

He responded with a big smile, “Yeah? And I like your shirt.”

That was three years ago. Lanier was then responsible for maintaining all records of commercial and residential electronic security alarms within Richland County. He later worked for RCSD’s PROJECT HOPE, which is an RCSD unit responsible for assisting elderly residents throughout the county.

Lanier loved working at RCSD and was impressed with the evolution he had seen in the department since Lott was sworn-in as sheriff in 1997, “This is a totally self-sufficient agency,” Lanier said when I interviewed him for an article, ‘The Grand Old Man’ (The Deputy, Oct.-Dec. 2018). “This department is capable of providing the full spectrum of law enforcement services – from technology to training to providing all manner of police assets – to the citizens it protects.”

Speaking of Sheriff Lott, Lanier added, “I’ve known Leon a long time. He is all business. He is a natural athlete: Keep in mind, he played ball, too! He has tremendous courage. And, most importantly, he sincerely cares about his people.”

When Lanier passed away, Lott said, “It’s sad when you lose a friend, and that’s what Col. Lanier was to many of us, certainly to me. We lost a great man.”

While with SCHP, Lanier served as both vice president and president of the S.C. Law Enforcement Officers’ Association. He also served as a chairman of the S.C. Criminal Justice Academy and as a regional chairman for the International Association of Chiefs of Police. His awards and decorations are too numerous to list.

His legacy includes the Colonel J.H. Lanier award presented for excellence and physical fitness to a stellar member of each graduating class of the SCHP.

Lanier is survived by his wife Frances (they were married for 63 years), four children, and eight grandchildren.