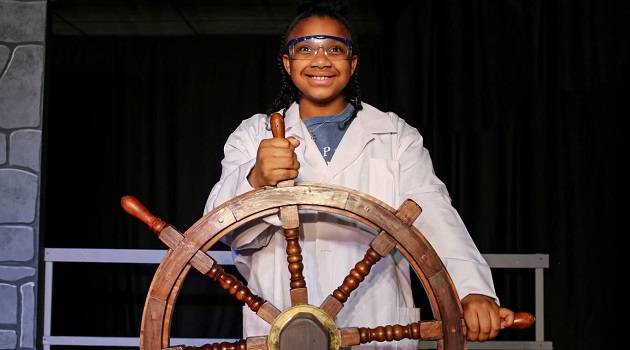 Columbia Children’s Theatre will be holding performances of the musical Nora’s Ark March 11-13.

Nora is a scientist working in her lab, when she discovers an imminent danger: the North and South poles are melting, and the Earth will flood. She sends her daughters off with specific instructions. Dora will find a cruise ship. Flora must free the animals at the Bronx Zoo and bring them to the ship, and Lora will find the rain gear.

Fitzi is in charge of the meal plan, but once the boat launches it becomes clear that in her excitement about being made “Chef,” she has forgotten the essentials, namely the food. Things look pretty desperate, and the Prey must make a decision; should they let their former adversaries the Predators starve to death, or help to figure out a solution to save them?

“Nora’s Ark is a really unique children’s production,” says director Julian Deleon. “It was written by jazz musicians as a part of the Jazz Drama Program, so it’s designed to expose young people to a few different styles of the genre. It’s a lot of fun.”

Nora’s Ark is a CCT Peanut Butter and Jelly production. Part of the CCT’s YouTheatre program, the PB&J players are performers from grades 1-5. Created in 2009, the program has trained thousands of young performers in Columbia and continues to provide unparalleled instruction to the city’s youth. Over 40 of the PB&J players are included in Nora’s Ark.

“I think Nora’s Ark is really a great example of the role experiential learning plays in our programming,” said Artistic Director Jerry Stevenson. “Kids see the play and they start to think a little about climate change and the different styles of jazz – they are expanding their horizons, but if you ask them, they will just tell you they are having fun.”

All performances are in the Cottingham Theatre at Columbia College, located at 1301 Columbia College Drive. Show times are March 11 at 7 pm; March 12 at 2 pm and 7 pm; and March 13 at 3 pm.

General admission tickets are $10, and $8 for active military and seniors with proper ID. Advance tickets are strongly recommended, and can be bought at columbiachildrenstheatre.com.