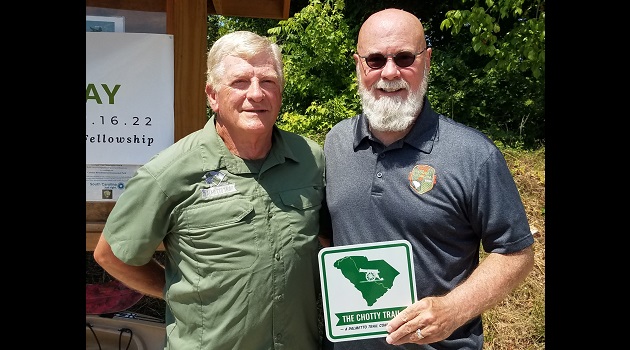 The Chotty Trail connecter, a 3.5-mile spur running from the east bank of the Wateree River through historic Camden, S.C., was announced Thursday, June 9, during a press conference announcing mid-July Camden Day events at the Camden Riverfront Environmental Park.

Named for the late Charles “Chotty” Mullikin, a celebrated World War II veteran and father of Dr. Tom Mullikin, a renowned global expedition leader; the Chotty Trail spur will ultimately connect Camden with the primary spine of the 500-mile Palmetto Trail which currently passes within 21 miles of the west bank of the Wateree River.

“Planning for the Chotty Trail began about a year ago as a way to encourage people to get out and explore historic Camden,” said Furman Miller, Midlands Regional Trail Coordinator for the Palmetto Trail. “We selected a route that covers nearly every historical point of interest between the river and much of historic Camden.”

According to Miller, approximately one mile of the route is wooded or open grassland with most of the remaining two-and-half-miles being urban (along the city’s sidewalks or paralleling roads).

“This is not only a tremendous honor for my family, but it’s an added hiking and running travel treasure for anyone wanting to enjoy and spend time winding through historic Camden, the oldest inland city in the Palmetto State,” said Dr. Mullikin, who will lead the third annual South Carolina Seven (SC7) expedition paralleling much of the Palmetto Trail in July. “A hike along the Chotty Trail – so named for my father and his college nickname [derived from his name “Charlie”] – will be part of SC7’s Camden Day events, July 16, which will also include a huge 1,000-boat kayaking event on the Wateree River where the Chotty Trail spur begins.”

The Chotty Trail was a cooperative effort between multiple agencies and key players, said Miller. “Everyone from Kershaw County, the City of Camden, the S.C. Department of Transportation, the local historical society and various associations like the Cedars Cemetery Association, also Camden High School, and Global Eco Adventures were all instrumental in making this happen,” he said.

Though Chotty Trail signage is already up along much of the new spur, woodland trail-blazing work will continue for the next few weeks with an official ribbon-cutting for the spur to be held on Camden Day, officially “A Classic Southern Summer Day,” July 16.