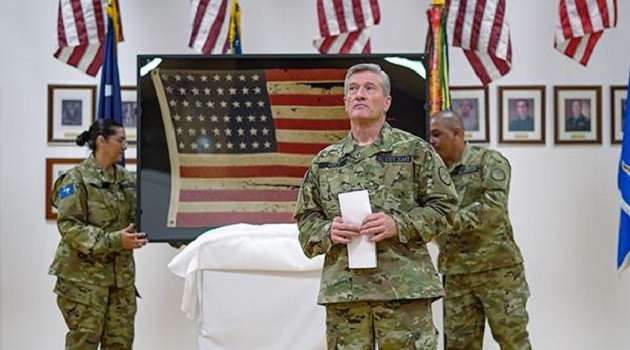 A 76-year-old battle-worn United States flag was presented to the S.C. State Guard during ceremonies at the historic Olympia Armory in Columbia, July 10, coincidentally the final day of INDEPENDENCE WEEK 2021. The flag was donated by Steve Roberts, brother-in-law of the late U.S. Army Corporal Gordon “Gordy” Galbraith of Greenville, who carried the flag across the Ludendorff bridge (aka the Bridge at Remagen) spanning the Rhine River in the spring of 1945.

“To have a piece of history of this magnitude housed in one of our facilities is really inspirational and important,” said McCarty following the ceremony. “I think if anyone ever needs to reaffirm their commitment to their service to the state and to the nation, having an opportunity to come and look at the flag and thinking about what it means and with this particular flag – where it was and what it did – underscores why we do what we do.”

In February-March 1945 as the U.S. Army’s 9th Armored Division and elements of the 9th Infantry Division advanced toward and into Germany’s industrial heartland, retreating German forces began blowing-up their bridges leaving only the Ludendorff still intact on the morning of March 8. That’s when 19-year-old Gordy Galbraith fastened the flag to a stick and with it dashed across the bridge to the east bank of the Rhine.

“Heroic by any measure,” said Brig. Gen. Lott, who also serves as Richland County sheriff and in recent weeks was named NATIONAL SHERIFF OF THE YEAR 2021 by the National Sheriff’s Association and S.C. Sheriff of the Year by the S.C. Sheriff’s Association. “The flag itself is only part of this great American story: What Galbraith did by carrying the flag, and why he did so, is the perfect representation of who we are and have always been.”

Galbraith told his family that the reason he carried the flag across the Rhine River was that he wanted everyone to know “the Americans are coming to make things right.”

It is believed that Galbraith’s flag was the first U.S. flag to appear on the east bank of the Rhine.