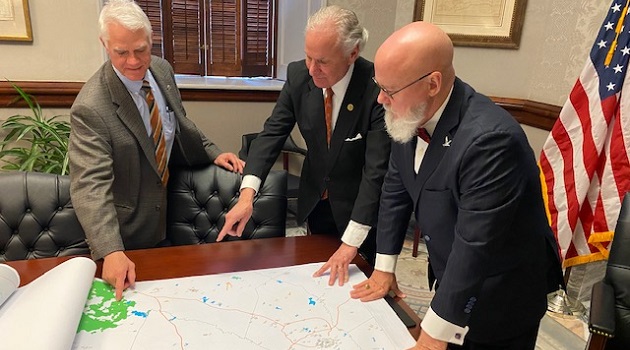 S.C. Gov. Henry McMaster, several state lawmakers, and the chair of the S.C. Floodwater Commission announced “the filing of two bills that will provide critical funding to increase the pace and scale of land protection in South Carolina,” according to a statement released Wednesday, Feb. 16, following a press conference at the S.C. State House in Columbia.

The companion bills (one introduced in the S.C. House of Representatives, the other in the S.C. Senate) are part of the South Carolina Conservation Enhancement Act – previously known as the Conservation and Antiquities Act – which will seek to double the state’s existing three-million acres of protected lands by 2050.

“We are rebuilding the Lord’s garden,” said S.C. Floodwater Commission chair, Dr. Tom Mullikin, during the press conference. “As I’ve heard others behind me say, once it’s developed, it can’t be undeveloped. And so we’re protecting those areas [and] creating public access that will be enjoyed for generations.”

According to Mullikin, whom McMaster tapped to lead the commission in 2018, the 2022 effort will also protect communities, the state’s economy, and the state’s vital natural resources.

Last summer when state leaders were hammering out the initial details of the plan, Mullikin said: “By preserving an additional three-million acres for future generations of South Carolinians, we are also strengthening the economies of rural communities in and around those protected lands. In protecting these lands, we are also simultaneously increasing a natural firewall of support against severe flooding which has plagued this state since at least 2015.”

The new companion legislation was authored by S.C. Senator George “Chip” Campsen, Senate President Thomas C. Alexander and others; with the S.C. House version being led by S.C. Rep. G. Murrell Smith, chairman of the House Ways and Means Committee.

The two bills stem from the findings of the Mullikin-led S.C. Floodwater Commission in its 400-page official report presented to the Governor in late 2019. The weighty document, which included in-depth contributions from each of the S.C. Floodwater Commission’s 10 task forces (subcommittees), described the myriad challenges specific to each of the task force’s areas of responsibility and provided detailed recommendations and suggested solutions for each of those challenges.

“The resultant South Carolina Conservation Enhancement Act will accomplish multiple goals,” said Mullikin. “And it is but one of the many creative ideas we are bringing to bear in our fight against future flood events. What Sen. Campsen has written into this companion bill is not only necessary, but forward thinking. Moreover, by ensuring the future protection of these lands, we are ensuring our state’s natural beauty and the fragile eco-systems so vital to all of us.”

The funds managed by the South Carolina Conservation Bank Trust Fund will be generated by a percentage from deed stamps with a quarter of the one-dollar state deed recording fee credited to the general fund.