St. Pat’s in Five Points to return for 40th anniversary 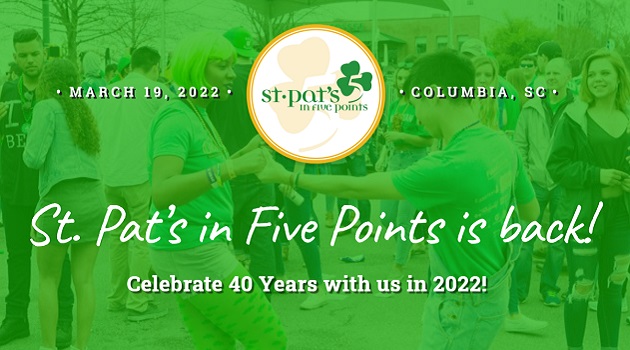 After a two-year hiatus due to the COVID-19 pandemic, the Five Points Association is has announced the return of St. Pat’s in Five Points March 19. 2022 is a special year as Columbia’s Irish tradition celebrates its 40th Anniversary.

Nearly forty years ago, Duncan MacRae of Yesterday’s Restaurant & Tavern, Steve Gibson of Peddler Steak House, Chuck Pettit of the Columbia Jaycees and Tony Latella of PYA Monarch sat down in a booth at Yesterday’s Restaurant & Tavern, had a few beers and devised a plan to increase the visibility of Five Points’ businesses on St. Patrick’s Day when most people were leaving town for Savannah. The Annual St. Pat’s in Five Points emerged forming a family fun-filled festival benefiting children’s charities in the Midlands.

The Five Points Association hosts the Southeast’s largest one-day St. Patrick’s Day event that garners an average of 45,000 attendees between all the day’s events and hopes to reach upwards of 55,000 in 2022. Festivities will include the Get to the Green 5K, 10K and 1-Mile Family Fun Run, the St. Pat’s Parade down Devine Street into Five Points, the family-fun Pot O’Gold Playland, five stages of music, artisan craft vendors, food vendors, green beer and more.

“The Five Points Association is proud to announce it will host St. Pat’s in Five Points in 2022 after canceling the event the last two years. It is exciting and serendipitous that the return of St Pat’s falls on the 40th Anniversary of the first festival and serves as a great reminder of the event’s unprecedented longevity and rich history of supporting local charities,” stated Steve Cook, Five Points Association President. “We appreciate our partnerships with the City of Columbia, Richland County, and most importantly, the festival attendees, from around the world that have made this event one of the most popular in the entire country.”

The Get to the Green Road Race registration as well as the St. Pat’s Parade, sponsorship, vendor and volunteer applications will be opening soon. If you would like more information on these opportunities, email [email protected]