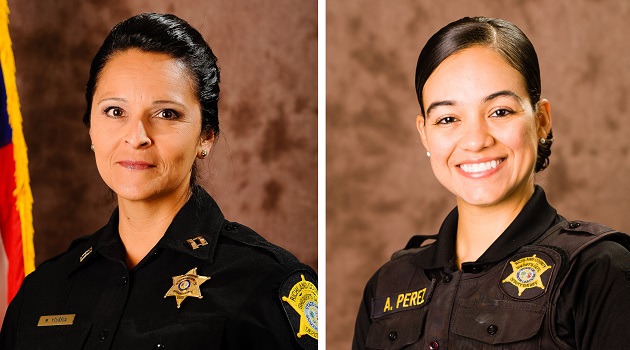 Major Maria Yturria and Master Deputy Addy Perez, both U.S. Army veterans and class 1 deputies with the Richland County Sheriff’s Department (RCSD), were among five women who have been individually honored as VETERAN OF THE WEEK by the S.C. Department of Veterans Affairs (SCDVA) during the month of March, Women’s History Month.

“It’s always important not only to recognize and support our military veterans, but to remember that women have been a vitally important part of our American military tradition for more than 200 years,” said Richland County Sheriff Leon Lott, who also serves as president of the Fort Jackson-Palmetto State chapter of the Association of the United States Army and as commander (brigadier general) of the S.C. State Guard. “Today nearly 16 percent of our nation’s armed forces are female personnel and there are nearly two-million living women military veterans, nationwide.”

Susan Vaughan McPherson, vice president of public policy and military affairs at the Columbia Chamber, points to a pioneering ethos which has guided the five women honored and so many others like them.

“As we celebrate Women’s History Month, we are blessed to have an abundance of amazing female leaders in our community to honor and recognize,” said McPherson. “This month’s military veterans, being honored by the SCDVA, are women who are trailblazers in so many regards – military leaders, protectors of safety, service providers for less fortunate individuals, daughters, spouses, mothers and friends. The diversity of thought they exhibit as a result of the different hats they wear is invaluable and a strong contributor to their success as coaches, mentors and friends.”

McPherson added: “Female leaders like Maria, Addy, Mary Louise, Brooke, and Heather empower others to reach beyond their means to achieve their full potential for the greater good.”

The S.C. Department of Veterans Affairs began its VETERAN OF THE WEEK program, honoring military veterans – men and women – from across South Carolina, in July 2020.