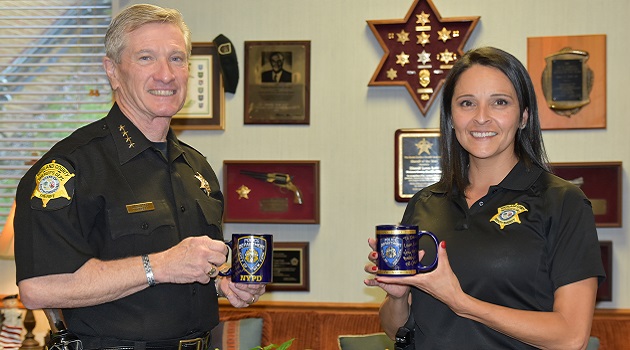 The NYPD mugs were a token of thanks to RCSD, and they were presented in recognition of RCSD’s ongoing “peace officer” branding initiative as well as RCSD’s development of a one-page PTSD (PTSI) awareness sheet being used for law enforcement training, nationwide. The PTSD one-pager was developed for RCSD in 2018, but in Apr. 2021 the sheet was forwarded to 17,000 law enforcement agencies across the U.S. including large metropolitan police departments like NYPD and LAPD for use in the training curricula.

Lisa Broderick, executive director of Police2Peace, which developed the “peace officer” branding initiative, accepted the gifts in New York on behalf of Sheriff Lott and RCSD.

Established in 1845, NYPD is one of the oldest police departments in the nation, and at 55,000 employees, including 35,000 uniformed officers, it is one of the nation’s largest.

– Picture of Sheriff Lott and Maj. Yturria by Joye King.