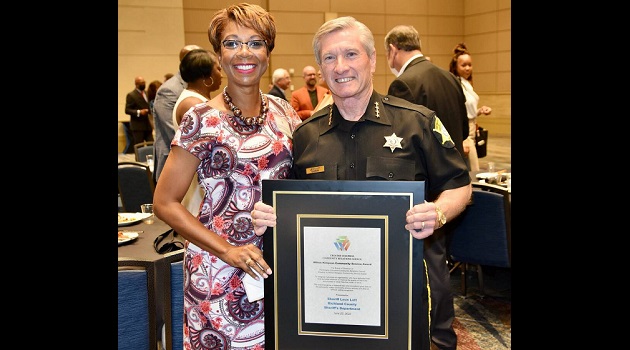 Award is the namesake of the late Milton Kimpson

Namesake of the late Dr. Milton Kimpson, a cabinet level advisor to Gov. Richard Riley and the first executive director of the CRC; the award was presented (one each) to both law enforcement leaders for their “model examples of leadership” in community outreach and community relations.

“Sheriff Lott and Chief Holbrook have dedicated themselves to community service, not only from a law enforcement standpoint but in terms of simply uplifting our communities,” said Judge Milton G. Kimpson, son of the late Dr. Kimpson. “That’s what my dad did during his lifetime, and I think that’s what the Community Relations Council stands for today and it always has. We are about bringing people and communities together, and so when we were considering worthy recipients, we could think of no two better persons than Sheriff Lott who has worked tirelessly to improve this community, as well as Chief Holbrook. They’re the dynamic duo.”

Kimpson added: “Sheriff Lott is very approachable. In our communities – meaning all communities – he is there. If you need something from law enforcement or really anything else, he’s there. That’s what community is all about. We have to depend on each other and support one another. And he [Lott] simply exemplifies that.”

Lott says that an award presented by an historically public-spirited organization like the CRC and named for “a man for all people” like the late Dr. Kimpson, makes his [Lott’s] receiving it all the more rewarding. “Community outreach and community relations have jointly served as the primary cornerstone undergirding the culture of our Richland County Sheriff’s Department since I was first elected sheriff in 1996,” said Lott. “And for that ongoing effort to be recognized by the leadership of our vitally important Community Relations Council is an honor surpassing all others.”

Lott added: “The award is extra special because it’s named after Dr. Kimpson, who I knew for 40 years. He was someone I admired and respected. He was a great role model for us in public service and someone that I looked to for advice.”

The presenting sponsors for the CRC awards luncheon were Dominion Energy, Willoughby and Hoefer Attorneys at Law, and Prisma Health.

Founded in 1964 during the height of the nationwide Civil Rights Movement, the CRC was established by business and professional leaders as a means of calming racial tensions across the Midlands.