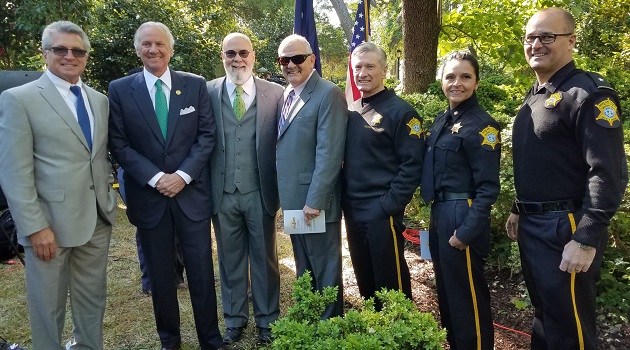 A top-level contingent from the Richland County Sheriff’s Department joined POWERPLANTSC officials and Governor Henry McMaster for the kickoff to a statewide tree-planting iniative, Thurs., April 22. The Earth Day kickoff was held on the grounds of the Governor’s Mansion in Columbia where S.C. Floodwater Commission Chairman Tom Mullikin, director of POWERPLANTSC; Gov. and Mrs. McMaster; and Lt. Gov. Pamela Evette planted a tree, the first of some 3.4-million loblolly pine tree seeds and some saplings which were to be planted by schoolchildren, Boy Scouts, 4H clubs, and other partners later in the day across the state’s 46 counties.

Attending the morning event were representatives from many of POWERPLANTSC’s growing number of partners, which have included the S.C. Forestry Commission, the S.C. Dept. of Education, the S.C. Dept. Corrections, Duke Energy, Dominion Energy, the Clemson University Extension Center, Palmetto Pride, the S.C. Association of Counties, Keep America Beautiful, Yamaha Rightwaters and many others.

“The presence of Sheriff Leon Lott – the national Sheriff of the Year for 2021 by the way – and two of his ranking officers speaks to the level of support and the energy we’ve created from all quarters with this initiative since we began planning it over a year ago,” said Mullikin. “Leon is both a friend and a leader who, like the rest of us, sincerely cares about the environment.”

The environment is key. According to officials with both POWERPLANTSC and the S.C. Forestry Commission, each tree planted will in time absorb up to 11,000 gallons of water a year. And with over three-million new trees planted in a single day, Mullikin and others believe the initiative will prove to be one of many creative approaches that will help mitigate disastrous flooding like that which the Palmetto State has experienced since the 1,000-year flood in 2015.

“We are involved in every aspect of the communities we serve,” said Sheriff Lott. “We fully support innovative ideas and projects that could ultimately save lives and protect property. Not to mention that projects like POWERPLANTSC provide young people with purpose and opportunity, and a fun way to get outside, enjoy, and even contribute to our state’s natural beauty.”

The tree seeds each in packs of 60 seeds were donated by the Forestry Commission and stored by the Dept. of Corrections prior to being distributed to staging areas across the state over the previous two weeks.