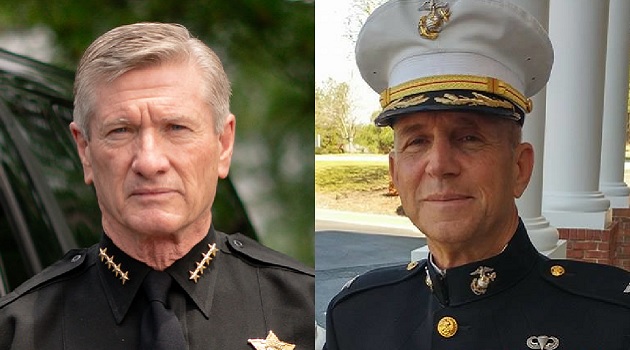 Richland County Sheriff Leon Lott was honored by the South Carolina Military Support Foundation (SCMSF), Thurs., May 20, for being named the National Sheriff’s Association (NSA) Sheriff of the Year for 2021.

The recognition, a plaque commending Lott, was presented by Col. (Ret.) Steve Vitali, U.S. Marine Corps, on behalf of the SCMSF.

“As the number one sheriff in the country, Sheriff Lott is one of those legendary law enforcement leaders who not only showcases all that is good as regards law enforcement here in the Palmetto State, but nationwide,” said Vitali, a veteran combat commander of the wars in Iraq and Afghanistan. “Lott is the reason why when rioting erupted here in Columbia a year ago this month, it was quashed in less than about 36 hours.”

“Extremely grateful for this recognition,” said Lott. “But I also have to say that this is not as much about me, as it is a reflection of the hard-working men and women of the Richland County Sheriff’s Dept. and more broadly the good citizens of Richland County who are always striving to help make our communities safe for all. So the awards and the ongoing recognition for these awards are for all of us.”

A 40-plus year career law enforcement officer, Lott was first elected sheriff of Richland County in 1996. He is currently serving his seventh term.

Established by the executive committee of the 2010 national Medal of Honor convention following the convention in Charleston that year, the SCMSF provides aid and support to military organizations and military veterans programs like the ongoing Fisher House project in Columbia.