Rogers receives Order of the Palmetto 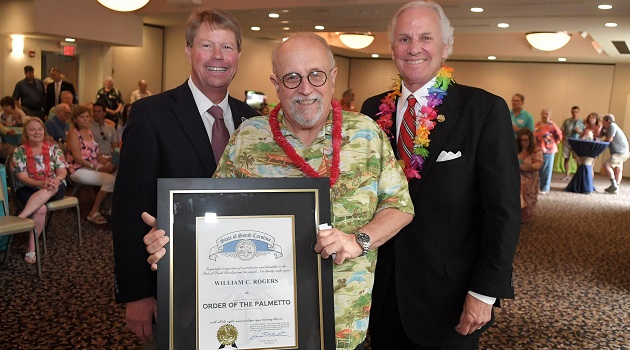 Gov. Henry McMaster presented South Carolina Press Association Executive Director Bill Rogers with the Order of the Palmetto during his retirement party on July 15 at The River Center in Columbia.

The Order of the Palmetto is the state’s highest civilian honor, given to residents “in recognition of a lifetime of extraordinary achievement, service, and contributions.”
Gov. McMaster presented the award on behalf of more than 5 million South Carolinians.

Rogers was nominated by his local representative, Rep. Chip Huggins, R-Lexington, who introduced the governor at the event and helped make the presentation.

Rogers will retire July 23, after 33 years of distinguished service to the citizens of the Palmetto State by leading the state’s newspaper industry.

During his career, which has spanned 55 years in journalism and journalism education, Rogers has served as a dedicated journalist, teacher and advocate for press freedoms and open government. As the longest serving full-time director in the S.C. Press Association’s nearly 170-year history, he has shown passion for quality journalism, open government and serving the members of SCPA.

The S.C. Press Association represents 15 daily and 76 weekly newspapers, and serves as an advocate for open government in the Palmetto State.