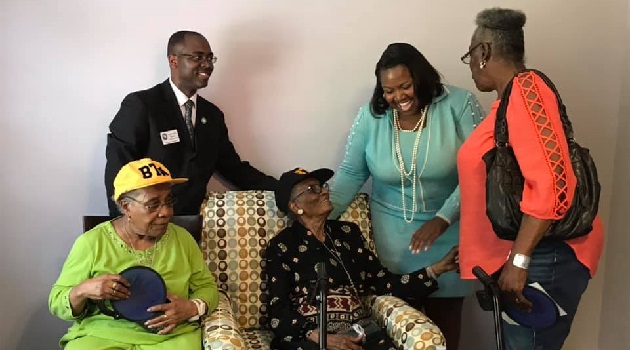 Because of a housing program in Richland County, a longtime resident now has a new home where a building in disrepair once stood.

Josephine Hall is the first person to receive a new house through Richland Rebuild, which launched in October 2018 to help households facing homelessness because of poor and unsafe living conditions.

“I am just delighted to be back on the street where I was born,” Hall said. “It has meant so much to me and everybody concerned has been a part of this thing, and I’m truly, truly grateful.”

Richland Rebuild is one of two rehabilitation programs the county launched in 2018. The other, Operation One Touch, assists with major home repairs up to $12,000. The programs are funded by the U.S. Department of Housing and Urban Development and implemented by the county’s Community Development Division.

Homes that are found to be beyond repair and unsafe during Operation One Touch become eligible for Richland Rebuild, which involves tearing down the existing dwelling and building a new house. The county will rebuild two homes per year as part of Richland Rebuild.

“What excites me is the department is growing,” said Jocelyn Jennings, coordinator for Richland County Community Development. “We have new programs. We’re benefiting a population we weren’t before.”

Hall first sought home repair assistance from Richland County in 2008 but did not meet the criteria for the existing repair programs at that time.

When the county launched the new programs in 2018, Hall regained hopes of making her bathroom handicap-accessible through Operation One Touch.

County officials visited her to find floors caving in, a lack of heat and air, and problems with the electrical system. The conditions were severe enough that Hall qualified for Richland Rebuild.

Community Development staff convinced Hall to allow the county to do more than improve the bathroom.

“The team, when they evaluated the home, decided that she was a little bit more deserving and there was a little bit more they could do,” said Richland County Councilmember Dalhi Myers, who is Hall’s District 10 representative. “So the Richland County Rebuild program was tooled up to help us get her back in what is now a really, really, really lovely home for her to enjoy her golden years.”

Hall is regarded as the matriarch of her family and the Little Camden community because of her longtime involvement in family and civic committees. She is also well known for her original poetry. At Thursday’s dedication, she read a poem that touched on how she felt: “grateful, thankful and truly blessed.”

Hall said she felt like she must have done some good throughout her life to have the county and community rally around her since the repairs began.

“It is a dream that has come true,” Hall said.

Those interested in learning more and applying for the Operation One Touch and Richland Rebuild programs can visit the Richland County Community Planning and Development Department at 2020 Hampton Street, Columbia.