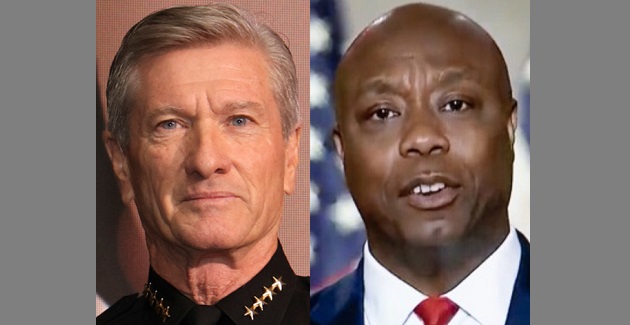 United States Senator Tim Scott, ranking member of the U.S. Senate Special Committee on Aging, praised Project H.O.P.E., a program of the Richland County Sheriff’s Department (RCSD), as a model for elderly outreach and assistance which might be implemented by other agencies, nationwide. Scott’s remarks were made during the committee’s annual “fraud threat” hearing in Washington, D.C., on Sept. 23, 2021.

In his opening statement, Scott said: “Education and greater awareness are the best ways to make seniors informed consumers. That’s why I am proud of what we have in South Carolina called Project H.O.P.E. — Helping Our Precious and Elderly — based in Richland County, South Carolina.”

Scott added: “Project H.O.P.E. partners retired law enforcement volunteers with our seniors. They check in on a weekly basis, and they make sure that they are very aware of the potential scammers out there and making sure that they create a firewall between the scammers and our seniors. I’m so thankful that there are dedicated members of our law enforcement community—the men and women of blue—who retire and still have a passion for people [and] find a new way to serve their communities in Richland, South Carolina.”

Established and operated by RCSD, Project H.O.P.E. fields specially trained volunteers who regularly check-in with and visit more than 600-800 elderly residents in Richland County, providing assistance in everything from replacing light bulbs and smoke detectors in homes to delivering special holiday dinners and gifts, as well as educating seniors about ongoing telephone scams and other fraud-related issues.

During a conference call with Scott’s office last month, Richland County Sheriff Leon Lott reiterated his commitment to combating fraud perpetrated against elderly citizens in central S.C. “We work closely with all of the state agencies to combat this threat to our seniors,” said Lott. “We work hard to educate our seniors as to the nature of this threat in its many manifestations as well as current trends as regards frauds, scams, and other related crimes.”

Lott added, “We’ve been doing this for 25 years now, and our always-accessible Project H.O.P.E. volunteers have worked tirelessly to keep our citizens informed as to these and other issues related to safety and well-being.”

“In 2020, the FBI Internet Crime Complaint Center received over 791,000 complaints,” said Scott. “Twenty-eight percent of the victims were over the age of 60. This resulted in approximately $1 billion dollars in losses to our seniors.”