Richland County Deputies honored for effectiveness, heroism in May 2020 riots 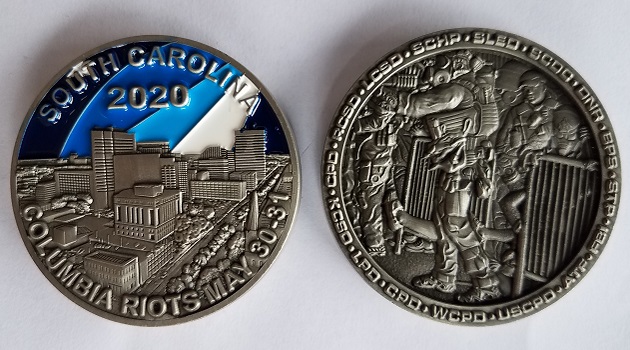 Commemorative coin was designed by City of Columbia police officer

A commemorative coin honoring the effectiveness and heroism of law enforcement officers from 16 different agencies during last year’s rioting in downtown Columbia was presented to more than 100 deputies with the Richland County Sheriff’s Department (RCSD), Aug. 4, 2021. The presentations were made by Richland County Sheriff Leon Lott to each deputy who actively participated in the defense of the city on May 30-31, 2020, when peaceful protesting devolved into widespread violence and wanton destruction and burning of public and private property.

“Everyone answered the call when I asked for assistance,” said Sheriff Lott. “It was a team effort to protect the city of Columbia.”

Designed by Preston Daniel Avery, an officer with the Columbia Police Dept. (CPD), the coin features the city skyline on the front and a reverse-side relief based on a photograph featuring a South Carolina Law Enforcement Division (SLED) agent and two RCSD deputies. The photograph was taken during the riots. Encircling the relief are the initials of the various law-enforcement agencies whose men and women were actively involved in quashing the riots.

“We are not Portland [Oregon], nor will we ever be,” said Lott. “The agitators and criminal opportunists took what began as legal, peaceful protesting by good people to a very dark place. But we at RCSD and the other 15 agencies who stood shoulder-to-shoulder with us, quickly brought our city back into the light.”

“To be part of this extraordinary team which brought this rioting to a safe and successful conclusion is something we can all be proud of,” said Major Harry Polis, RCSD Operations Division. “This coin does not celebrate the event: It celebrates the men and women who risked their lives to end it.”

“We saw a lot of the leadership stepping up in a big way,” said Waddell, who says he is proud of being a recipient of the coin. “Throughout the event, our leaders were with us, always making sure we were all good. The event also demonstrated how well different law enforcement agencies can work together for one purpose. It was a very serious situation, but we worked together to stop others from taking over the city.”

“This coin, earned by our deputies – some of whom were injured – and those officers from mutually supporting agencies, demonstrates the great working relationships we all have with one another,” Lott said. “And to see every agency stamped on the coin speaks to the powerful bond we all share with one another.”

Approximately 200 coins were purchased by the Richland County Sheriff’s Foundation for distribution to every RCSD deputy who participated. The Aug. 4 presentations were made in staggered ceremonies of 20 deputies at a time at RCSD’s Denny Terrace Training Division headquarters auditorium.

CPD officer Avery said approximately 550 coins were produced, and most have already been purchased and presented.

The May 2020 commemorative coin was cast and produced by U.S. DOD Coins.