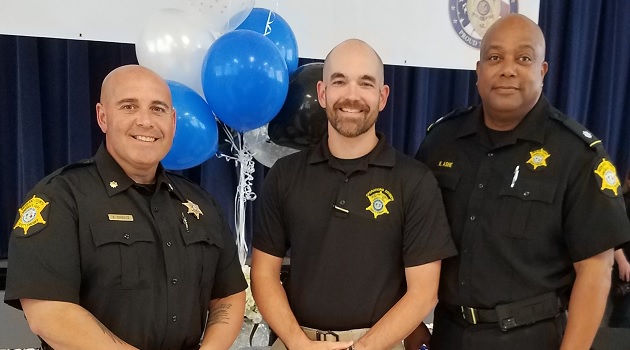 Nearly 20 patrol deputies, investigators, and supervisory officers were promoted at the Richland County Sheriff’s Department (RCSD), including one – Lt. Col. Kelvin Ashe – who made history this week.

Among those achieving the next higher rank in RCSD’s various divisions and regions were Deputy Chief Harry Polis, the new commander of the Operations Division, and Lt. Col. Ashe, who directs the Uniform Division.

Polis, is replacing Deputy Chief Chris Cowan who retired from RCSD on Sept. 30 to become the new Cayce Chief of Police, effective Oct. 4.

Ashe becomes the first RCSD lieutenant colonel – the rank between major and deputy chief – in the department’s 234-year history.

“All 19 sworn deputies are proven law enforcement leaders,” said Richland County Sheriff Leon Lott. “They are not only well-trained, experienced, and fully capable of assuming the myriad responsibilities of the next higher rank, but each and every one of them is committed to the kind of selfless service we here at RCSD are known for and respected for within the communities we serve.”

All 18 men and one woman were officially ‘pinned’ at RSCD headquarters, Wed., September 29.