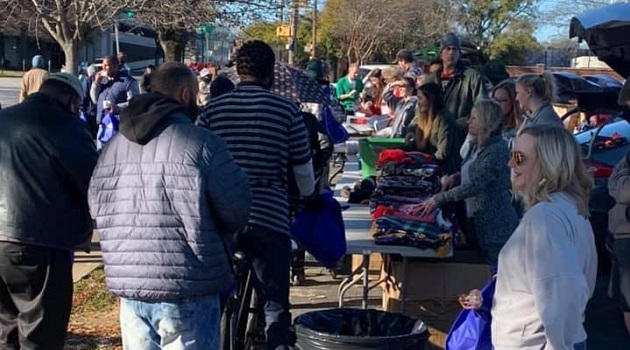 OSJ was first inspired a decade ago by Irmo-area mom and hairstylist Heather Malovic, who began the project from within her own home. Heather initially asked friends and family members for donations of blankets, scarves, and other necessities, which she and her children then personally delivered as Christmas gifts to homeless men and women living in downtown Columbia.

As word of Heather’s holiday efforts spread, so did the public’s interest. Now, eleven years later, the endeavor has taken on a life of its own, with hundreds of Midlands-area families and local businesses coming together to help “Spread the Joy.”

Heather said the outpouring of love and donations has been astonishing.

“Every year, more and more homeless men and women are blessed by the donations,” she said. “We all come away with a greater appreciation of the true meaning of Christmas.”

OSJ volunteers will distribute the gifts in front of Hope Plaza and the Christ Central Ministries building on Main Street on December 24. Their goal is to collect enough items to fill 150 reusable grocery-sized bags.

Monetary donations and gift cards are also appreciated. For more information, contact Heather Malovic at 803-414-2115 or [email protected], or visit the “Operation Spread the Joy” on Facebook.