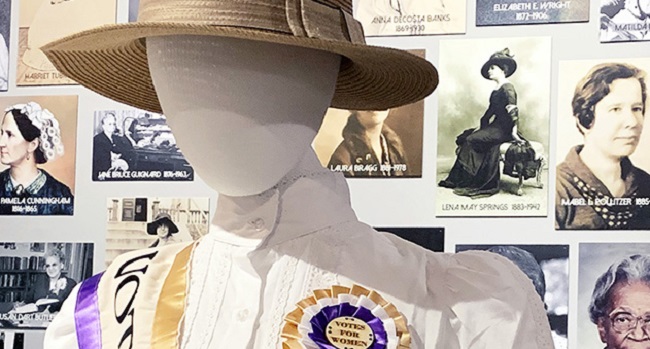 It’s been 100 years since the 19th Amendment passed, which gave women the right to vote, and the South Carolina State Museum is honoring the 100th Anniversary with a new exhibit, A Voice of Her Own: South Carolina Women in Politics. To celebrate, the museum is offering free general admission to Future Voters, aged 12 and under, from August 8 – 23. These Future Voters can enjoy this special exhibit at no charge to learn about the importance and history behind the women’s suffrage movement.

From tribal women leaders, to our first female Governor, A Voice of Her Own explores how women engaged with the political history of our state. A prehistoric scraper tells the story of how native women have a long tradition of being equal with men and powerful in tribal politics. Sherds of porcelain from a colonial plantation are an example of property, which women could spend their lives building, but not own. A tag that a Charleston enslaved woman was forced to wear underlines that some women were property, whose work built the base of South Carolina’s political power.

“This exhibit encourages guests to look at history a bit differently,” says Curator of Cultural History, Joann Zeise. “Instead of focusing on the role of men in the development of the state’s wealth and prestige, objects will give a closer look at the women who made that wealth and power possible.”

The early 20th century found a coalition of suffragettes working for a national amendment to give women the right to vote. Guests will see a “Votes for Women” banner that belonged to USC student, Shirley Black, as well as a wide variety of political material from the 20th century including buttons both supporting and opposing the Equal Rights Amendment. From women who fought for prohibition to those who opposed it, this exhibit demonstrates how women have always had diverse opinions and concerns not captured within any one political party.

In conjunction with the exhibit, the State Museum will also be offering a selection of programs in August – both onsite and online:

Virtual Cocktail with a Curator

This series of videos includes the museum’s Curator of Cultural History, JoAnn Zeise, taking an in-depth look at some of the objects and stories in the exhibit while featuring a specialty cocktail.

This special edition of the museum’s weekly trivia night series invites virtual guests to team up as we test their knowledge on women’s history and politics in South Carolina. Sponsored by Columbia Craft Brewing Company. Registration required at scmuseum.org.

This popular summer event returns with health and safety measures in place. In addition to full dome planetarium shows with choreographed visuals set to music, this evening will also feature access to the exhibit, A Voice of Her Own, as well as themed photobooth fun, a specialty cocktail, cash bar and more. Capacity is limited and tickets must be purchased in advance at scmuseum.org.

A Voice of Her Own is now open through September 27. Entrance is included with museum membership or general admission, which is $8.95 for adults, $7.95 for Seniors and will be free for Future Voters, kids aged 12 and under. The museum is managing capacities to facilitate social distancing and, per City of Columbia Emergency Ordinance, face coverings are required for guests aged 10 and above.

The museum is open 10 am to 5 pm Tuesday through Saturday, 12 pm to 5 pm on Sunday and is closed on Monday. Due to the museum’s need to manage guest capacity, online advance ticket purchase is recommended at scmuseum.org.