By: John
In: Police Report 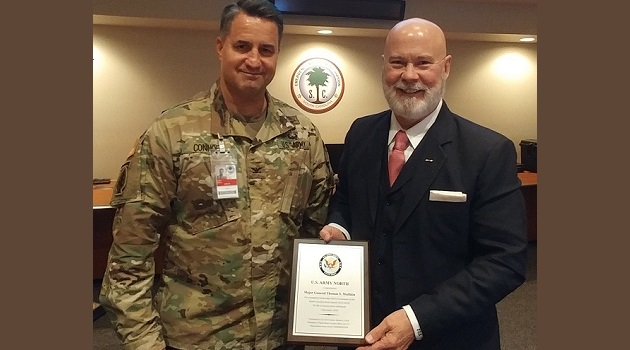 Tom Mullikin, recently appointed of the South Carolina Floodwater Commission (SCFC), was honored by Col. Bill Connor, representative of U.S. ARMY NORTH for the Palmetto State, who recognized Mullikin’s service to the state of South Carolina while in command of . State Guard from which he retired Dec. 1, 2018.

A portion of the plaque reads, “For exemplary leadership while in command of the South Carolina State Guard, 2014-2018.”

Mullikin has served S.C. and the nation, both in-and-out of uniform, for nearly 25 years. A former U.S. Army JAG officer serving as both trial counsel attached to the U.S. ARMY SPECIAL OPERATIONS COMMAND, and as a self-defense instructor (Mullikin holds a Black Belt in traditional karate and is a certified Army Master Fitness Instructor) teaching ‘combatives’ to soldiers. He later served in a civilian capacity as Special Assistant to the Chief Prosecutor of Military Commissions overseeing the trial of terrorist mastermind Khalid Sheik Mohammed and other 9/11 terrorists. After a decade in the Army followed by another in the S.C. Military Dept., Mullikin ultimately retired as the commander of the S.C. State Guard.

Connor, a U.S. Army Reserve Infantry officer (Airborne Ranger) who also served in both the regular Army and the S.C. Army National Guard, is a former senior U.S. military adviser in Helmand Province, Afghanistan and a recent distinguished honor graduate of the Army War College. In addition to his civilian law practice in Orangeburg and his statewide EPLO duties, Connor serves as chairman of the SCFC’s National Security Task Force.

Both men graduated from the USC School of Law.