Miles from Nothing: The Genius of Donell Benton 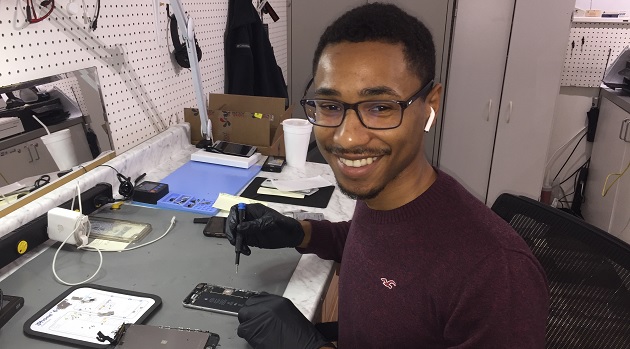 It’s interesting what motivates us.

For some, it’s inspirational sayings or Scripture scribbled on strategically placed sticky notes.

We spend time and more money in search of that magic motivator – the one thing that unleashes our true potential.

Because then, you have everything to gain.

That’s the way 29-year-old Donell Benton sees it these days.

He’s the self-described “genius” behind Genius Repair located downtown at 1332 Main Street, one of the locally owned shops now occupying the space inside the refurbished, historic building.

Some Columbia residents may not even be aware they have a genius in their midst. But spend just a few minutes with Benton, and you know if not in the presence of Einstein exactly, there is something uniquely intelligent and inherently wise about him.

In his tiny, but bright and efficient workspace, you’ll find Benton every weekday, looking a bit like a sophisticated surgeon of sorts, operating on the smallest of electronic bits and boards.

His jam is fixing your smart phones and computers, but he likes a good challenge. He doesn’t advertise this but there are few mechanical or electronic wrongs he can’t right. From expensive latte machines to the innards of your wristwatch, Benton intuitively understands how gadgets run. Bring it to him broken, and he first visualizes in his head how it should look before ever placing a healing hand on it.

For Benton, fixing things is how you build a life broken by low expectations.

By his own admission, Benton grew up “poor” with a “poor mind set.” He was one of 13 children in a struggling home marked, he says, by abuse, poverty and substance abuse.

A middle child, Benton felt overlooked, unwanted and oftentimes, neglected. A diagnosis of dyslexia confirmed for him what he believed others saw in him – a kid not worth their time, let alone their emotional or financial investment.

While dyslexia made school and reading painful – if not impossible – and subjected him to bullies’ taunts, he took solace in the partnership between his mind and his hands. As a young kid he would challenge himself to fix whatever was broken around the house – and dared others to find something he couldn’t mend.

Looking back now, it’s easy to see the little boy who saw value in taking time to examine the broken bits, who used extra care in restoring what had been mistreated and carelessly mishandled. He saw that with the right attention, most things were worth saving.

He did for broken things what he longed for someone to do for him.

When he was 15, he got a job at the Piggly Wiggly and earned enough to buy his own car. He worked hard but it worked against him. Why quit when you’re ahead? Stay put. Stay forever. At the supermarket.

But he wanted more than low.

To get it, he would leave his hometown and break relations with all those who expected nothing from him.

He knew he had something to give.

Years of heartache, missteps and trials would follow. There would be bankruptcy, betrayal and broken relationships.

But when you start with nothing – every new thing – is something.

So, one phone at a time, Benton went to work. He eventually was able to open the shop on Main. Each morning the kid with dyslexia is greeted with a sign he purposely posted that reads simply: I.Am.Genuis.

Benton credits his faith with carrying him through the tough times – those many moments he felt abandoned he now looks back and sees God.

And he’s no longer alone. He’s married with a beautiful wife and son – and a baby on the way.

So where once the notion of no one believing in him fueled him – today he’s motivated by the knowing that the people who love him best also believe in him the most.

For a kid who came from nothing that’s almost too much to bear. The wanting to do well now for them – and for that little boy he once was – can be a heavy load.

But Donell Benton is learning the one thing he can’t fix is the past.

“I have a fear of not being known,” he tells me, “of not being heard. I have a lot of talent.” For a moment I can see him wandering back to the boy saddled with low expectations.

But then, with a shy smile, Benton lights up as a customer interrupts his thoughts and he expertly answers a question. He takes in his own shop, tangible evidence he’s in the business of fixing what’s on his plate today – and capable of handling what comes his way tomorrow, too.

“I have so much to give!” he says, as he locks the shop door, and heads home to the family waiting especially for him.

And for Donell Benton, so much, is so very far from where he started – with nothing.