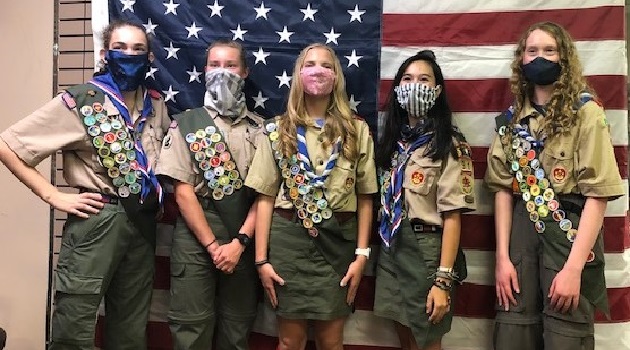 Revered for more than a century, the rank of Eagle Scout in the Boy Scouts of America (BSA) has been an iconic recognition exclusively for young men, often called, “The Ph.D. of Boyhood.” Now, five young women from the Midlands have changed all that by becoming among the very first females in the nation to earn the organization’s highest honor, and area Scouting families and leaders could not be more proud of them.

Each of the young women completed her final Eagle Scout requirement on Thursday night, the first date of eligibility for females to earn the rank, by passing a board of review conducted by area Scout leaders. The groundbreaking Eagle Scouts are Cameron Caulk of West Columbia, Reagan Millman and Madelyn Ridley of Lexington, and Carolina Franklin and Ava Phelps of Columbia.

“These remarkable young people have made history and we are excited for them,” said Doug Stone, Scout Executive of the Indian Waters Council of the BSA, which serves the Midlands. “Just as all Eagles before them, they have earned every bit of the award through a very high level of commitment, leadership, service, and skill and character development, Stone said.

“They have done so in female troops – separate altogether from the boy troops – and remarkably, they have completed the final steps and overcome the last hurdles during a worldwide pandemic.”

Achieving the BSA’s highest honor includes serving in leadership roles in the troop, showing Scout spirit, leading others in a major community service project, and earning at least 21 merit badges. Last year, the Indian Waters Council presented a record 169 Eagle Scout awards to young men from throughout the region.

“These are the future leaders of our nation. We believe strongly that the more people in this world who live up to the values and responsibilities of being an Eagle Scout, the better, Stone said. “We hope these young women inspire others to join Scouting, live their ideals and make a difference in their lives and communities.”

PHOTO: Eagle Scouts (L-R) Carolina Franklin, Ava Phelps, Reagan Millman, Cameron Caulk, and Madelyn Ridley are among the first females in the nation to achieve the highest honor in the Boy Scouts of America.

2020-10-06
Previous Post: Virtual conversation on civic engagement this Wednesday
Next Post: RCSD and Richland Library team-up to read to kids