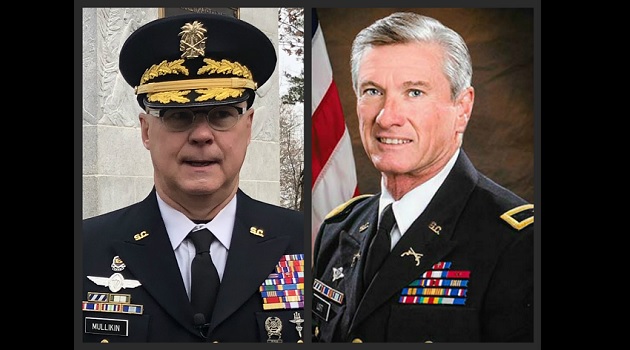 Maj. Gen. Tom Mullikin will retire from command of the S.C. State Guard (SCSG) during a formal change-of-command ceremony, December 1, at the State House. Mullikin will relinquish command to Brig. Gen. Leon Lott, sheriff of Richland County who has previously held the post of deputy commander SCSG.

Lott – a recent inductee into the Fort Jackson Hall of Fame and president of the Association of the United States Army (Palmetto State Chapter) – has served in various leadership and command capacities in both SCMD-JSD and SCSG, In SCSG, he has held the posts of commander of the SCSG’s provost marshal’s detachment, deputy commander for SCSG special operations, and deputy commander SCSG. He is a 43-year career law enforcement officer who has served as sheriff of Richland County for more than 20 years.

Established as the Provincial Militia in 1670, the all-volunteer SCSG is a state defense force organization within the S.C. Military Department, which includes the S.C. Army National Guard, the S.C. Air National Guard, the state’s Emergency Management Division, and the SCSG among other elements. The SCSG’s current personnel numbers are just under 1,000 Guardsmen, including retired and former U.S. Army Special Forces operators, Army Rangers, U.S. Marine infantrymen, engineers, medical professionals and law-enforcement officers among others.