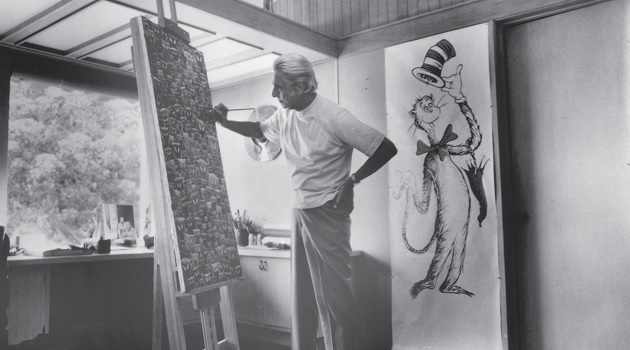 For more than 60 years, Dr. Seuss’s illustrations have brought a visual realization to his fantastic and imaginary worlds. His artistic talent went far beyond the printed page and yet, to this day, his Secret Art Collection is virtually unknown to the general public.

Throughout his lifetime, Theodor Seuss Geisel (aka Dr. Seuss) created paintings and sculpture, which he secreted away at the Dr. Seuss Estate.

Rob Shaw Gallery & Framing, 324 State Street in West Columbia will share a selection of artworks from The Art of Dr. Seuss Collection August 26 – 28. Visitors may explore and acquire works from Dr. Seuss’s best-known children’s books, as well as The Secret Art of Dr. Seuss, a collection based on decades of artwork, which Dr. Seuss created at night for his own personal pleasure. The wackiest and elements of the collection are Dr. Seuss’s three-dimensional

Additionally, Seuss’s cat was never far from his artist thoughts. He drew himself as The Cat Behind the Hat, his cat was the protagonist in several of his Secret Art paintings and, as a fun aside, many of his early advertisements and cartoons had a “cat bystander” witnessing all the action. They hinted at his adventures across the world, his reclusive sensibility despite his fame, and his penchant for the childlike fantasy and humor, which infused nearly every facet of his life.

Despite the unprecedented demand during his lifetime, no limited-edition artworks were ever conceived, authorized, or created until this historic project began in 1997, six years after Geisel’s death. That year, the exclusive project put into motion a series of artworks and exhibitions, which firmly established him as one of the most iconic artistic talents of the 20th century.

In her preface to the popular coffee table book on this collection, The Cat Behind the Hat, Audrey Geisel (Ted Geisel’s widow) writes, “I’m gratified to carry out Ted’s wishes and have these works revealed to the world.”