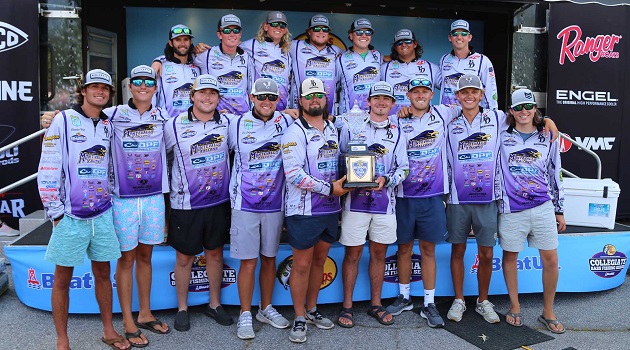 Following the conclusion of weigh-in at Dreher Island State Park May 27 points totals were calculated, and the standings finalized for this season’s Bass Pro Shops School of the Year presented by Abu Garcia.

The final standings revealed Alabama’s University of Montevallo’s lead over second place shrank to its slimmest margin in the past several months.

Montevallo did just enough at Lake Murray to claim the school’s first-ever title as Bass Pro Shops School of the Year presented by Abu Garcia. Back-to-back defending winners McKendree University closed the margin to less than 300 points to finish the season in second, and Adrian College leap-frogged Murray State to earn third-place honors. There were also several other moves inside the Top 25 national rankings.

The 2021 BoatUS Collegiate Bass Fishing Championship marked the 16th edition of the event. BoatUS has works with the Association of Collegiate Anglers to provide college student anglers with the tools, resources, and platform to fish competitively on a national level.

“16 years ago…this all started with the hope of growing competitive fishing at the college level and providing student anglers with a platform to compete and socialize with fellow anglers,” said Wade Middleton, ACA Director and President of CarecoTV. “None of this would have been possible without the support of BoatUS. Back in 2005, they made a sizable investment of time and money into this demographic of the sport, and anglers competing in this year’s Championship owe a great deal of thanks to BoatUS for its unwavering support through the years.”

The BoatUS Collegiate Bass Fishing Championship is a two-day traditional five-bass limit format event. Lake Murray will play host to the 16th installment of this Championship. Up for grabs will be tens of thousands of dollars in prizes and contingencies, as well as the crowning of a winner in the prestigious School of the Year race. To find out more about the event visit Lake Murray, Fishing.