Kids get free admission during Space Week at the State Museum 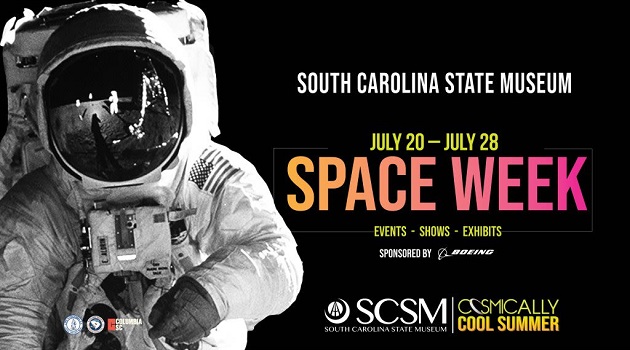 In celebration of the 50th anniversary of the Apollo 11 moon landing, the South Carolina State Museum is offering free general admission to kids 12 and younger during Space Week, July 20 through July 28.

The weeklong event is sponsored by Boeing. Guests will get to discover the museum’s newly renovated 13,000 square foot space gallery, complete with a state-of-the-art, 360 degree, interactive digital globe.

The 360 degree digital globe or “Magic Planet,” is a focal point in the new gallery. Guests will be able to interact with the globe, using it to see planets, galaxies, watch videos, answer questions and more.

“We wanted to take this iconic moment in history to showcase the museum’s ability to engage each guest with a multidimensional presentation of South Carolina’s influence in the Apollo missions and bring a piece of the universe back to earth,” said Willie Calloway, executive director of the South Carolina State Museum. “The globe itself is a fascinating piece of technology that will captivate our audience with an interactive display of space, earth science, weather and more. I’m excited for our guests to experience this new addition to the State Museum.”

The Space Gallery also features a new meteorite display with specimens that represent shattered asteroids, pieces of the moon, and even small fragments from Mars. The meteorites were collected from all over the world including, Australia, Africa, Asia and South Carolina. They are billions of years old and some of have never been on display before.

Also prominently featured in the gallery is a new replica of NASA’s Mars Curiosity Rover. The Rover, located on a recreated Mars surface and panoramic backdrop, is a partnership between the University of South Carolina’s School of Engineering and Computing and the State Museum. In this area guests will learn about the mission of the Curiosity Rover and other missions to Mars as well as see large, high definition photos of the Mars surface.

The Apollo 50: Journey to the Moon exhibit is also a part of the museum’s new Space Gallery. The new exhibition charts the history of NASA’s Apollo space program and South Carolina’s role in lunar exploration. Guests will be able to sit in a made to scale Apollo Lunar Rover and see a collection of Apollo space program artifacts and a moon rock.

• A replica Apollo Lunar Rover used for astronaut training guests can sit in.

• A collection of artifacts from Charles Duke’s Apollo 16 mission including: a “rock box” used by Duke to collect moon samples, a cuff check list, a chronograph, Duke’s Apollo training flight suits, his helmet and more.

Space Week will be full of activities from planetarium and 4D shows like Fly Me to the Moon, to hands on activities throughout the museum and evening events like Mystery Moon Theater Live. For a full list of the weeks activities from July 20 through the 28 visit scmuseum.org.