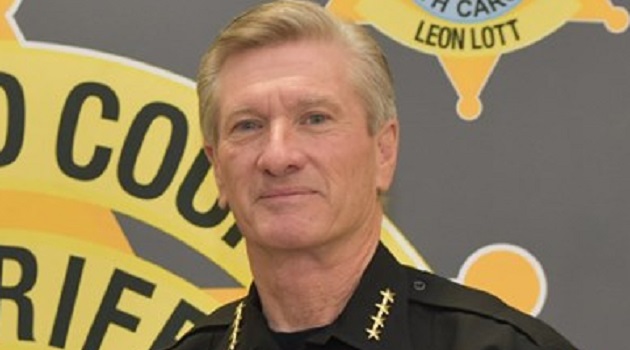 The South Carolina Black Belt Hall of Fame (SCBBHOF), the Palmetto State’s premier martial arts organization, announced the endorsement of Richland County Sheriff Leon Lott in his bid for re-election one hour prior to a campaign-kick-off reception for Lott at Gregg Park in Columbia, May 22.

The endorsement was “an easy choice for us,” says retired U.S. Marine Col. Steven B. Vitali, a 2017 inductee into the SCBBHOF. “Sheriff Leon Lott is one of the best-known, most-respected law enforcement leaders in the nation,” Vitali says. “Not to mention his respect among the citizens of Richland County which is reflected in his being elected and then re-elected time-and-again to the county’s top lawman’s post.”

“Leon has a proven track record as Sheriff of Richland County,” says the elder Vitali from his home in Atlanta, GA. “He’s not only earned the trust of the citizens he and his department are sworn to protect, his near-1,000-employee Richland County Sheriff’s Dept. [RCSD] operates in a culture of very high professional policing standards, high physical fitness standards, and tremendous community outreach. It is for those reasons and others that the SCBBHOF named him an ‘honorary black belt’ a year or so ago.”

Lott who has served as Sheriff for more than two-decades, is one of the nation’s most high-profile sheriffs. During the waning days of the Iraq War, he was invited by the Iraqi government to help that country stand-up its first-ever female police academy in Erbil. He traveled to Iraq. They planned, established, trained, and it worked.

According to a 2016 article published by the U.S. Army, “The invitation from the Iraqi Police Service came as a result of the Sheriff’s internationally recognized success.”

Lott’s success has served as a model for other law enforcement leaders, nationwide, and began with his often-colorful ascension up through the ranks following his becoming an RCSD patrol officer in 1975, rising through the ranks to become a SWAT Team officer and narcotics captain. He later served a stint as the chief of police for St. Matthews, S.C. And in 1996, he was elected sheriff of Richland County, a post he has held ever since.

Lott is the primary driver behind why RCSD is one of the few regularly featured law enforcement agencies on A&E’s hit television series LIVE PD, and why RCSD is the only agency which has been with the program since it first aired in October 2016.

Lott’s success is also manifested in his department’s myriad deputy career-building programs and RCSD’s becoming the first law-enforcement agency in the nation to establish a pre-PTSI (post-traumatic stress injury also known as PTSD) conditioning program for deputies and other officers. The success of Lott’s pre-PTSI program has resulted in numerous law enforcement agencies reaching out to RCSD for guidance and direction on how best to incorporate similar programs into their own training curriculums.

“South Carolina – and more specifically, Richland County – needs Leon Lott for at least another four years,” says Col. Vitali, who commanded Afghan Army and U.S. forces in Afghanistan. “The SCBBHOF, which includes many of the nation’s greatest tournament fighters, recognizes this, which is why the endorsement. And so do those in my own Richland County who are well aware of the proven record of work and public safety this sheriff has provided all of us and our families for years.”

Since its inception in the 1980’s, the SCBBHOF has become one of the nation’s most-respected karate halls of fame. In addition to the Vitali brothers, the Hall of Fame includes the likes of martial arts national tournament champions Mike Genova, Sam Chapman, Bobby Tucker, Bruce Brutschy, Marty Knight, Michael Goldman and John Orck.